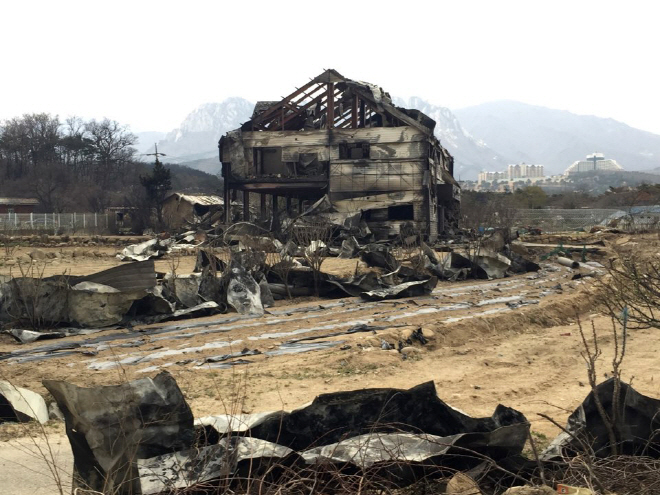 Burned houses in Goseong County, about 160 kilometers northeast of Seoul, after a blaze engulfed the eastern province. (Yonhap)

GANGNEUNG, Apr. 12 (Korea Bizwire) — Government officials in Gangwon Province are being lauded for their heroic efforts after they rushed to a zoo that was nearly burned to ashes by a forest fire that broke out in Gangwon Province on April 4, guiding animals to safety before firefighters arrived on scene.

According to the city of Gangneung on Thursday, two local government officials drove a quarantine vehicle to a zoo in Okgye-myeon around midnight on April 4.

When section chief Choi Du-soon, who had worked as an industrial manager in Okgye County, saw the fire spread, he thought the nearby zoo was in danger, and commanded a quarantine vehicle with action officer Baek Hyun-bin.

As Choi guessed, the zoo was on the verge of being overcome by the fire. The two used a hose to spray water from the quarantine vehicle and stopped the fire.

The zoo, which could not be reached by firefighters in the chaos of the massive fire, did not suffer any damage to its more than 1,000 animals and facilities, including dogs, rabbits, hamsters, parrots, flying squirrels and horses, due to the quick response.

The two officials spent all night driving the quarantine vehicle that could hold about 1 ton of water to extinguish the fire.

During the day, they used pickaxes to clear a path in areas where they could not enter with the quarantine vehicle, and were able to extinguish the rest of the fire.

After putting out fires all day, the two officials returned to the office by 8 at night. The heroic act was belatedly made public when the zoo owner wrote on the bulletin board of the Gangneung City Hall’s Nuri website “Let’s Praise.”

The owner praised the officials’ effort to put out the fire at the zoo and nearby housing areas.