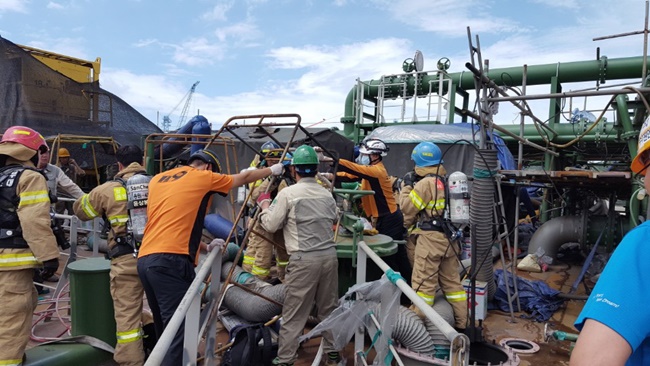 Beginning in Daegu, Busan and North Gyeongsang Province, the new program designed to help victims of industrial accidents overcome PTSD will be launched nationwide in November, and will cover those directly affected as well as witnesses on the scene who could also have suffered from psychological trauma.(Image: Yonhap)

SEOUL, Sept. 12 (Korea Bizwire) – The Ministry of Employment and Labor is set to launch a government-backed counseling program for victims of industrial accidents who suffer from trauma including sleep disorder and seizures, following growing calls to help those with posttraumatic stress disorder (PTSD).

Beginning in Daegu, Busan and North Gyeongsang Province, the new program designed to help victims of industrial accidents overcome PTSD will be launched nationwide in November, and will cover those directly affected as well as witnesses on the scene who could also have suffered from psychological trauma.

Under the program, an investigation will be launched by the government into each industrial accident, during which it will be decided whether victims need therapy or treatment for PTSD or not.

On industrial sites with over 50 workers, two sessions of counseling and aftercare will be provided if deemed necessary.

The new PTSD treatment program will be managed through cooperation between companies and workers’ health centers, with the two parties providing information and data to the Korea Occupational Safety and Health Agency, which will serve the role of a mediator and help both parties.

Currently, at over 20 workers’ health centers located across the nation, medical specialists, nurses, psychologists and work environment experts as well as clinical exercise practitioners are on standby to offer checkups and counseling services to workers in various fields.

In addition, with the new program in effect, a group of medical specialists will offer a number of on-site medical services to small companies with fewer than 50 workers, including impact assessment exams and counseling services.

Victims of major industrial accidents such as collapses, crashes, falls, amputation and attempted suicide will be prioritized when it comes to the candidate selection process for the new PTSD patient support program, with plans to expand the scale of support once more counseling staff members are secured.

With the PTSD patients support program scheduled to go nationwide later this year, Kim Wang, an official from the Ministry of Employment and Labor responsible for prevention of industrial accidents, urged cooperation from companies.

“We hope companies where major accidents have occurred actively encourage their workers to take part in the new trauma treatment program,” Kim said.