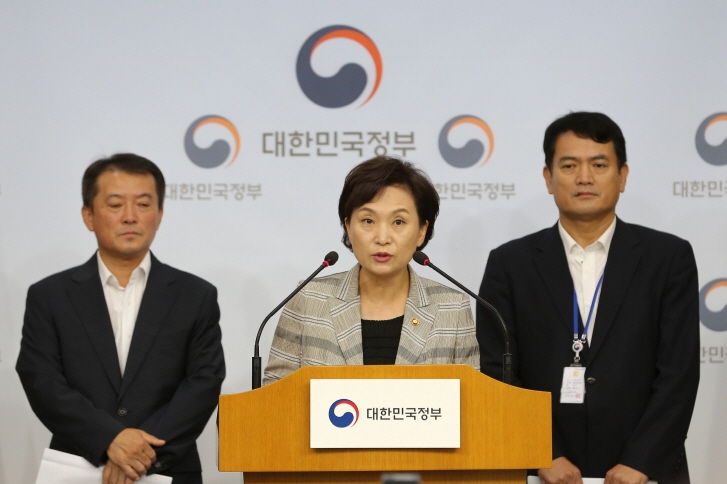 Minister Kim Hyun-mee announces the government’s decision to suspend the operation of fire-prone BMW cars starting Aug. 15, 2018, in an address to the nation in Seoul on Aug. 14. (image: Min. of Land, Infrastructure & Transport)

SEOUL, Aug. 14 (Korea Bizwire) – South Korea on Tuesday issued an order to suspend the operation of all BMW vehicles that have yet to receive safety inspections amid dozens of German cars catching fire.

Last month, BMW said it will start recalling 106,317 vehicles next Monday after making emergency safety checks on all models with an exhaust gas recirculation (EGR) module that it cited as the “root cause” of recent fires.

The German carmaker said it will complete the inspections on the models subject to the planned recall by Tuesday. But 27,246 models had not been checked as of midnight Monday, the Ministry of Land, Infrastructure and Transport said in a statement.

“With concerns over additional engine fires in BMW cars increasing, the central government has requested regional authorities issue an order to suspend the operation of uninspected BMW vehicles starting Wednesday, together with an order to put them under safety checks,” Transport Minister Kim Hyun-mee said in an address to the nation.

Once the owners of the fire-prone BMW cars receive a notice from the government, they are obliged to immediately get safety checks on their cars. They are only allowed to drive their cars for the purpose of the inspections, the statement said.

BMW said Tuesday it will follow the government’s decision and take all steps to minimize the inconvenience of its customers by providing them with rented cars.

It aims to complete the planned recall within this year, though such measures usually take one to two years.

A total of 39 engine-related fires in BMW cars, mostly the best-selling 520d sedan, have been reported this year through Tuesday. No injuries or fatalities have been reported in the EGR-caused fire incidents. The EGR module is a standard feature of diesel exhaust systems.

The ministry will consider imposing penalties, including punitive damages, if automakers cause damage to consumers by intentionally and maliciously not taking steps to repair and recall faulty parts in time, Kim said.

In July, the number of newly registered foreign vehicles rose 16 percent to 20,518 from 17,628 a year ago, according to the Korea Automobile Importers and Distributors Association (KAIDA).

Five out of 10 imported vehicles sold in Korea last month were made by German carmakers.

But BMW, which also has the MINI and Rolls-Royce brands under its wing, saw the on-month sales of vehicles fall over the past four months through July due to the fire concerns.

If BMW continues to suffer declines in on-month sales for the rest of the year, Audi Volkswagen and Mercedes-Benz are widely expected to be the biggest beneficiaries in the Korean passenger vehicle market.