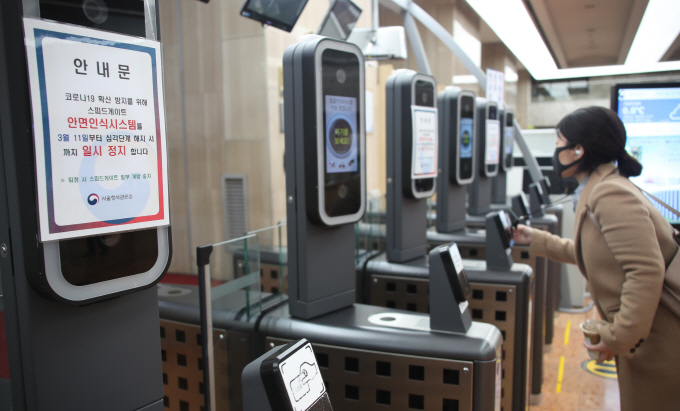 A government employee enters a gate of the government complex in Seoul on March 11, 2020, with a face mask on, as the operation of a facial recognition system to enter the complex has been suspended amid the spread of the new coronavirus. (Yonhap)

Under the guidelines, public servants across the country are expected to take turns working remotely, either at home or at so-called smart work centers run by the government, according to the document distributed to 50 government organizations by the Ministry of Personnel Management.

The heads of each organization will decide on the numbers of those working remotely, while manager-level public servants will continue to work at offices as usual.

The guidance, aimed at reducing office density and face-to-face contact, advises those working in offices to vary their commuting and lunch schedules.

It mandates that each team designates an employee to check whether there are team members with COVID-19 symptoms twice a day.

The new rules, the strongest regarding government personnel, come amid concerns that more public servants could be affected by the contagious virus that has affected more than 7,800 people in the country.

As of Thursday, 23 public servants, including 13 at the Ministry of Oceans and Fisheries, working at the country’s main government complex in Sejong have tested positive.

The oceans ministry said that it will test all 570 employees who work from its Sejong office to prevent further spread of the illness.

All buildings occupied by the ministry have been disinfected, and the office used by those infected was temporarily closed as a safety measure.

The education ministry and the Ministry of Patriots and Veterans Affairs have each confirmed one case and said employees were told to stay home and not to report to work.

South Korea has 11 government complexes, including the main complex in Sejong, 130 kilometers south of Seoul, as well as in major cities such as Seoul and Daejeon.