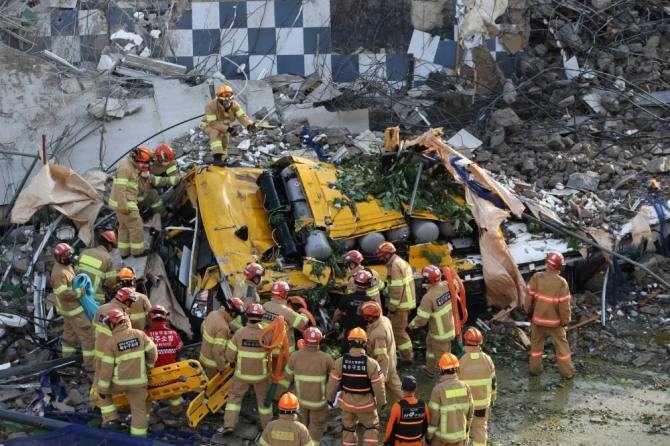 Firefighters carry out rescue operations after a 5-story building collapsed and fell on a bus and two passenger cars in the southwestern city of Gwangju on June 9, 2021. (Yonhap)

SEOUL, March 28 (Korea Bizwire) — The government on Monday sought the cancellation of HDC Hyundai Development Co.’s business registration in what could be the heaviest punishment against the builder over a deadly partial collapse of a high-rise building.

Outer wall structures of the 39-story apartment building under construction in the city, 330 kilometers south of Seoul, crumbled on Jan. 11, leaving six workers dead and another injured.

The Gwangju Metropolitan Police Agency announced an interim investigation result after 76 days of joint probes with the prosecution and the labor ministry, identifying three major causes of the collapse.

First of all, the construction method of the 39th floor was changed to the deck plate method without a structural review, and the load was increased by installing additional concrete supports, the police agency said.

Second, the bearing capacity was weakened on the 36th to 38th floors due to the failure to install concrete supports, it noted.

It cited insufficient quality control as the third cause of collapse, saying concrete in the lower floors did not reach the proper strength, which resulted in the collapse of the 39th floor and successive collapses of the 16 floors down to the 23rd floor.

The police agency stressed that HDC Hyundai, the main contractor of the project, its subcontractors and the construction inspection company were all responsible for the three causes of the building collapse.

Based on the probe result, the land ministry said it has asked the Seoul city government to either cancel Hyundai’s business registration or suspend its operation for one year, citing the need for “heaviest punishment, given the cause and damage of the incident.”

The ministry also said it will seek criminal punishment against more company officials by reporting the case to the police. 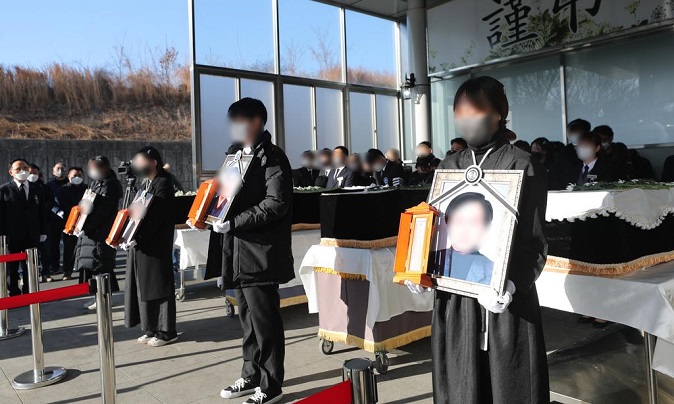 A joint funeral ceremony for the victims of a deadly apartment building collapse in Gwangju, about 330 kilometers south of Seoul, is held at a funeral home in the same city on Feb. 27, 2022. Exterior walls of the 39-story building under construction in Gwangju crumbled in January, killing six workers. (Yonhap)

According to the probe result, HDC’s on-site manager allowed subcontractors to change to the deck plate construction method without conducting a structural review and did not even check whether concrete supports were installed.

Moreover, the company’s quality manager did not properly examine the quality of concrete provided by a local ready-mixed concrete company.

A subcontractor removed concrete supports without any structural review or concrete compressive strength test, while the inspection company was negligent in its duties to check the installation of concrete supports and the concrete quality.

Police have so far booked 20 people on charges of negligent homicide, and violations of construction and occupational safety laws, and put six of them — three HDC officials, two subcontractor officials and one supervisor — under arrest.

They plan to conduct further investigations into suspected negligence on the part of HDC itself and other possible illegalities by officials related to concrete quality management.

The government vowed to toughen punishment of companies responsible for deadly incidents in a zero-tolerance policy toward shoddy construction.

In the case a company causes deaths of more than three civilians or five workers due to major damage to facilities, its business license would be canceled and it is not allowed to apply for a fresh license for five years to come

A company’s license will also be canceled if a firm is caught for poor construction twice in five years, according to the ministry.

“We will implement a set of prevention measures as soon as possible to prevent any innocent citizens and workers from being victimized at construction sites. We will pour all of our resources to ensure the public safety,” ministry official Kwon Hyuk-jin said.

Seoul city government said it will make a decision on the fate of the construction company within six months, adding that thorough review of related law and regulations is necessary to determine if the case is subject to such punishment.

Under the law, cancellation of registration of construction business or suspension of business for up to 12 months can be enforced if a builder’s poor construction works, by intention or negligence, causes serious damage to major structural parts of a facility and a danger to the public.

“We will set up a task force involving legal experts to review the case and have consultations with the land ministry before making a decision,” a city official said.