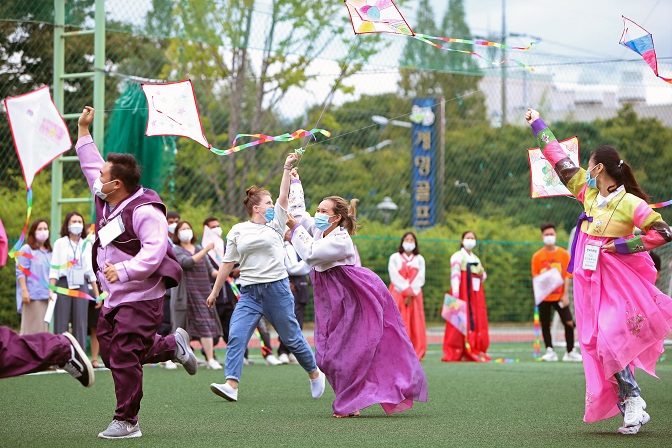 This Sept. 25, 2020, file photo shows foreign students wearing the traditional Korean costume hanbok and flying kites at a university in Daegu ahead of the Chuseok holiday. (Yonhap)

SEOUL, Sept. 12 (Korea Bizwire) — The government has drafted a new mid-term plan to expand the education of 53 foreign languages that are less commonly taught but deemed increasingly important to the nation’s engagement with the world, officials said Sunday.

Education, justice, gender and other ministers Wednesday discussed the education ministry’s proposal for the second five-year basic plan for the education of the critical foreign languages, which will be implemented in 2022.

The previous first five-year plan was implemented from 2017-2021 following the enactment of the Act on the Promotion of Education of Critical Foreign Languages in 2016.

The new draft plan calls for expanding opportunities to learn such languages for all levels of students and the general public.

The government will provide common online courses and teachers specializing in the languages to elementary, middle and high schools, the ministry said.

The authorities also plan to triple the number of courses for such languages in the K-MOOC public free online learning program to 60 by 2026 from the current 21.

Under the first five-year plan, the ministry designated three universities as special institutions to teach the critical languages and provided support for their programs for 15 languages.

The new plan seeks to increase the numbers of such institutions and languages.

The government will also operate more programs to nurture translators and specialists in such languages and increase support for language learning for children of multicultural families, officials said.