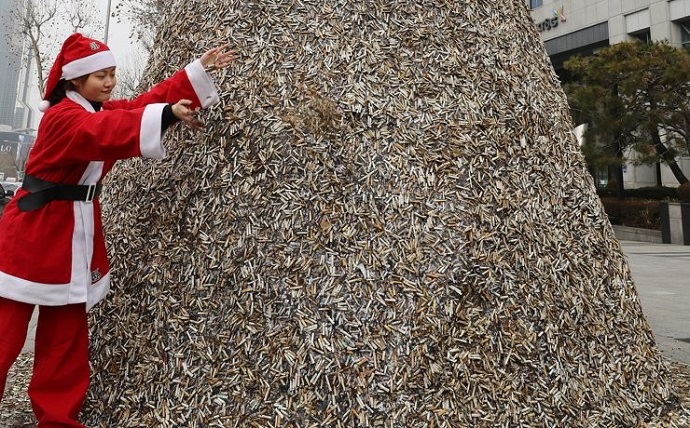 A member of the Korean Federation for Environmental Movement, clad in a Santa suit, attends an event in Seoul on Dec. 23, 2019, to install a Christmas tree made of dumped cigarette butts, as the environmental activist group calls for a ban on the use of plastic for cigarette filters as part of efforts to protect the environment from toxic plastic pollution. (Yonhap)

SEOUL, Aug. 31 (Korea Bizwire) — The government has announced a new initiative to promote the collection and recycling of cigarette butts, a source of pollution in urban areas.

In collaboration with the Gangbuk District Office in Seoul, the Ministry of Environment plans to launch a pilot project with respect to the collection and recycling of cigarette butts from September.

To this end, the ministry recently placed a research study order.

Cigarette butts are not only litter that taints the streets, but also contain materials that are considered to be a main cause of marine fine plastics.

The ministry has been imposing a waste processing fee of 24.4 won per pack on cigarette makers and importers since 1993. Nonetheless, there is no management system for the collection and processing of cigarette butts.

Through the pilot project, the ministry and the Gangbuk District Office will establish a plan for efficient collection and transport of cigarette butts, while exploring the idea of recycling them through heat recovery.

They also plan to carry out technological development to promote material recycling through filter separation and pre-processing.