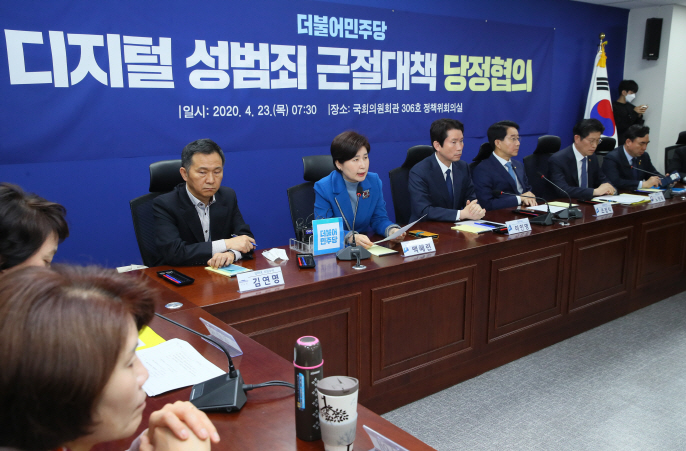 Ranking officials from the ruling Democratic Party and the government meet at the National Assembly in Seoul on April 23, 2020, to discuss measures to fight digital sex crimes. (Yonhap)

The government said it will treat any production of digital sexual materials as a felony crime and eliminate the statute of limitations for offenders.

In addition, the authorities will introduce a criminal confiscation system in which all proceeds from sexual crimes are seized even before offenders are convicted.

The government confirmed those and other measures to eradicate digital sex crimes in an interministerial policy coordination meeting presided over by Prime Minister Chung Sye-kyun.

Earlier in the day, the government held a high-level meeting with the ruling Democratic Party and vowed to push for parliamentary passage of relevant bills before the tenure of the current 20th National Assembly ends in May.

The government vowed to raise the legal upper age limit for minor victims in statutory rape cases, referring to crimes that involves having sex with someone who is underage, by three years to 16.

Under the current law, anybody having sex with a person under 13 years of age is to be convicted of rape, even if they have consensual sex.

Sexual assaults on minors will also be punished as felony crimes, and new penalties will be created against the online grooming of children, in which minors are asked to submit sexual videos or photos, or receive threats over their disclosure.

The government will push to increase the length of prison sentences for convicted possessors of child and youth sexual abuse materials from less than one year to less than three years.

Anybody fined for possessing child and youth sexual abuse materials will be banned from working at schools or child care facilities, it said.

Undercover investigation techniques, currently used for drug probes, will be introduced to digital sex crimes, with investigators posing as minors, for instance, the government said.

The authorities will also reinforce the obligation of internet business operators to deter the circulation of digital sex materials, enhance the protection of sex crime victims by building a 24-hour one-stop support system and widen social perception that viewing digital sex materials is a crime.

As part of efforts to better protect victims of digital sex crimes, the authorities will also extend full support to eliminating illegal videos in cyberspace as soon as possible. 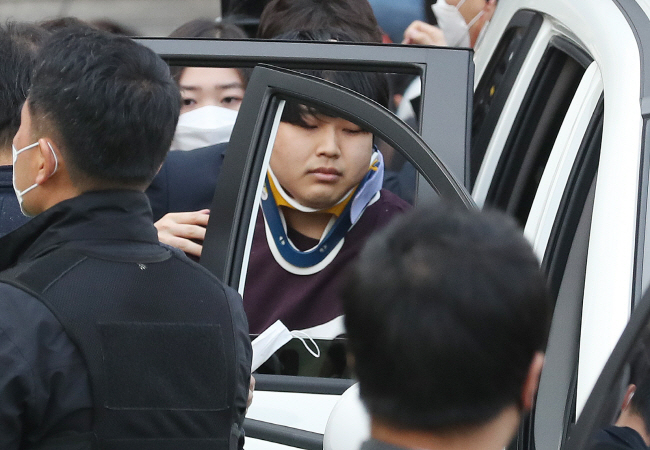 The latest measures came as the nation has recently been shocked by a string of sexual exploitation cases centered on group chat rooms of the Telegram messenger service.

Most notably, Cho Ju-bin, a 24-year-old, and his co-conspirators have been indicted or arrested for allegedly blackmailing female victims, including underage girls, into providing sexual videos, which were then posted in his pay-to-view Telegram chat room, dubbed “Baksabang.”

At least 25 people, including eight underage girls, have been confirmed to be exploited by Cho.

The Democratic Party said it will cooperate with the government to pass three pending revision bills for the Criminal Law, the Sexual Violence Crime Act and the Information and Communication Network Act through the Assembly.

The three bills, all related to online chat room sex abuses, call for stricter punishment of blackmailing with videos of a sexual nature, in particular.

In addition, the party will submit more revision bills on the payment of rewards for informants of digital sex crimes and expansion of employment restrictions for sex offenders.

“The ruing party asked the government to devise fundamental measures to root out all digital sex crimes. Those measures should include rigorous investigation, punishment and support of victims that meet international standards, as well as measures to block the demand,” said Rep. Baek Hye-ryun, head of the ruling party’s task force on digital sex crimes.