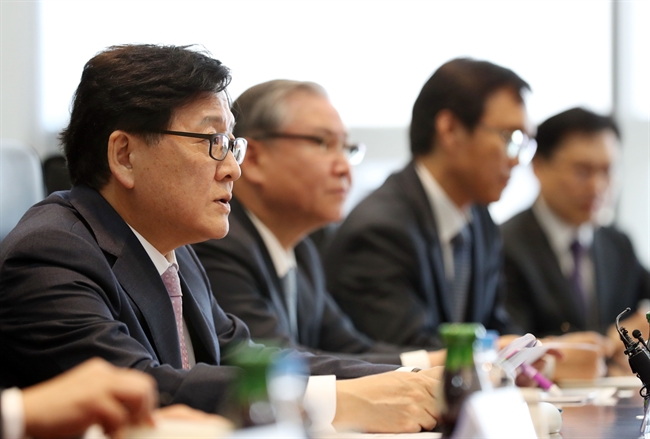 Health Minister Chung Chin-yeob said the government will strengthen cooperation with biopharmaceuticals and drug companies to help them expand and build plants in the global market. (image: Yonhap)

The remarks were made during a meeting attended by Health Minister Chung Chin-yeob, and executives of major drug and medical companies. The meeting was held at the opening ceremony of biopharmaceutical firm Celltrion Inc.’s new plant.

“The government will strengthen cooperation with biopharmaceuticals and drug companies to help them expand and build plants in the global market,” Chung said, adding that the planned measures will also contain a detailed road map to train more experts in the field.

The ministry said it is currently mapping out the long-term measures and fine-tuning details after getting input from experts. The measures will be announced by the end of year.

“Steady efforts towards innovation and the government’s support policy are both needed to increase the global competitiveness of the local bio and drug sectors that represent the fourth industrial revolution,” Chung said.

The government has been making efforts to nurture the bio sector, which is viewed as the nation’s next growth engine after IT. South Korea aims to become a global biotech and medical industry hub going forward.

In recent years, local bio companies have become more competitive on the global stage on the back of robust R&D spending and policy assistance provided by the government, the ministry said. In order to become a global powerhouse in the sector, the ministry emphasized the importance of quality manpower.