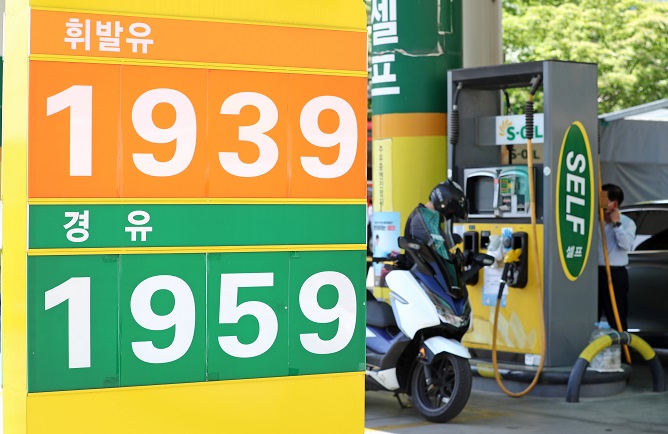 A gas station in the central city of Daejeon, about 164 kilometers south of Seoul, shows the gasoline price (top) and diesel price (below), with the diesel price the higher of the two, in this photo taken on May 9, 2022. (Yonhap)

SEOUL, May 15 (Korea Bizwire) — Finance Minister Choo Kyung-ho said Sunday the government will make it a top priority to stabilize rising product prices fueled by the Russia-Ukraine war and other external uncertainties.

The government will set up measures for price stabilization through consultations with related ministries as quickly as possible, the finance minister said in a meeting in Seoul.

“South Korea stands at a serious and urgent stage as the prolonged Russia-Ukraine war, major economies’ monetary tightening policies and higher inflationary pressures are affecting its economy,” he said.

The government said it will initially focus on stabilizing the prices of flour and diesel to help reduce consumer prices, which rose at the fastest pace in more than 13 years in April.

Consumer prices jumped 4.8 percent last month from a year earlier, accelerating from a 4.1 percent on-year gain in March. Most of last month’s price gains were mainly driven by a hike in prices of petroleum products, according to Statistics Korea.

On May 11, the price of diesel outstripped that of gasoline for the first time in 14 years due to tight global supply stemming from the Russia-Ukraine war and recent fuel tax cuts.

In South Korea, diesel is normally cheaper than gasoline.