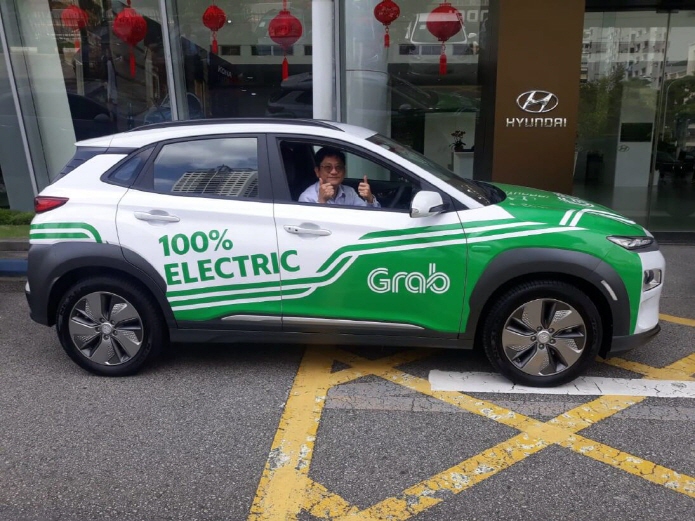 A driver giving a thumbs-up in a Kona EV used for Grab’s ride-hailing services in Singapore. (image: Hyundai Motor Co.)

In November, Hyundai Motor and its affiliate Kia Motors Corp. jointly invested US$250 million in the Southeast Asian company for a business partnership in ride-hailing service markets, the carmaker said in a statement.

“The company is aiming to enter electric car markets in Southeast Asia through the partnership with Grab and gain a share of those markets,” the statement said.

Grab has initially purchased 20 Kona electric vehicles (EVs) from Hyundai for its service and plans to increase the number to 200 by the end of this year, Hyundai said.

The Kona EV can travel up to 400 kilometers per charge. The driver can charge the all-electric car to around 80 percent full in about 30 minutes, it said.

In partnership with Grab, Singapore Power has granted Kona EV drivers a 30 percent discount when powering the emission-free car at charging stations, the statement said.

This week, the Kona EV grabbed a coveted North American Car, Utility and Truck of the Year award at the Detroit auto show.