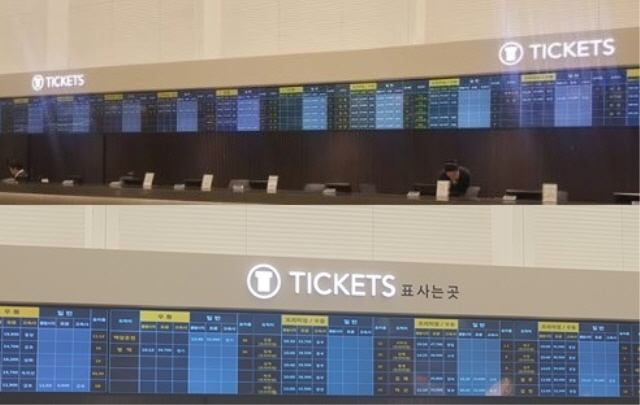 Seoul Express Bus Terminal recently opened with a new look after remodeling, and the name of the ticket office was indicated in English only. They added Korean writing later. (Yonhap)

SEOUL, Jan. 13 (Korea Bizwire) — It is a common sight to see Korean omitted where it is needed with a trend of English-only design.

The new trend makes use of English exclusively for brand names and business names, in addition to other signage.

A case in point is the Seoul Express Bus Terminal. It recently opened with a new look after remodeling, and the name of the ticket office was indicated in English only.

This generated a significant backlash, forcing the terminal to add Korean writing.

The terminal completed its internal remodeling and reopened last month, marking only “Tickets” in English at the box office’s window and at the top of ticket vending machines.

Criticism arose, as citizens shared photos of ticket offices in English on SNS and other online communities.

The terminal then added Korean signs earlier this month that said “Where to Buy Tickets” and “Unmanned Issuing Machines.”

However, unlike English, where colorful LED lighting was used, not only was the Korean writing relatively inconspicuous, but only about half the size of the English signage.

Criticism continued that it was a situation of “putting the cart before the horse.”

New bus stop bells, introduced by the Seoul Metropolitan Government, are also a public facility used by both men and women, just like the terminal, but have resulted in criticism for the omission of the Korean alphabet.

Although criticism has been raised over the fact that some new buses only have signage indicating “STOP” in English, vehicles with exit bells that are not written in Korean are still in operation.

This phenomenon is not limited to public places or facilities. Recently it has become a common practice because of the frequent use of names or products in English.

In Insadong, a famous tourist destination for Korean arts and crafts in Seoul, even foreign companies such as Starbucks wrote their brand name in Korean to preserve the traditional landscape and values.

However, these days, even Insadong is flooded with English signboards.

Starting at the beginning of Insadong-gil, there are ten businesses operating only with English signboards, including a stationery store in English.

However, an official at the Jongno Disrict office in Seoul said, “Even if it is Insadong, we cannot force businesses to use Korean signboards.”