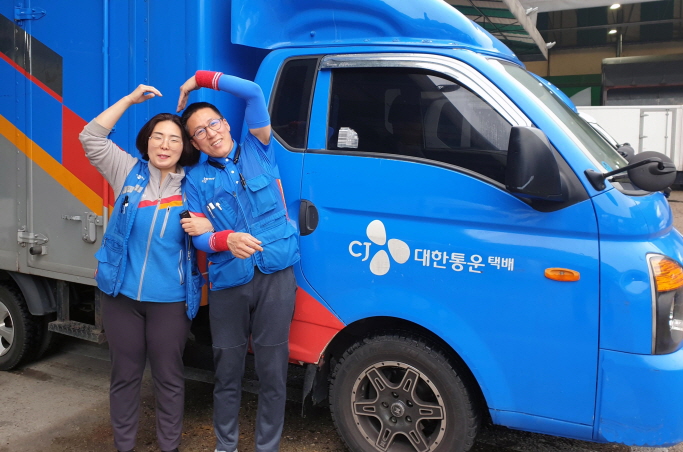 SEOUL, May 20 (Korea Bizwire) — Choi Han-min, a 43-years-old man who has been working as a courier for six years, has been working with his wife Jang Min-sook since two years ago as the volume of shipments from his clients has increased.

Jang, a stay-at-home mom, started working at a courier service to help her husband with his work, but now she and her husband are driving their own vehicles for deliveries in Gwangju, Gyeonggi Province.

“The cost of education for three children is very high, but I work with my wife to secure additional customers and earn more household income, gaining stability at home and at work,” Choi said.

According to a survey conducted by CJ Logistics Corp., a major South Korean logistics firm,, couples accounted for 13.6 percent of the 18,000 courier drivers nationwide at 2,450, or 1,225 couples.

The figure is up 6 percent, or 70 pairs, from last year’s survey.

A total of 3,498, or about 20 percent of the total number of courier drivers, includes family members such as couples, parents-child relationships, and siblings.

CJ Logistics suggested that the increase in efficiency of work due to the miniaturization of delivery products and the introduction of technologies such as automated facilities are creating an environment where one can control the volume of deliveries and working hours on their own, and delivery person is changing into a job that can be recommended to one’s family.

The company also noted that as the volume of parcels has increased, courier drivers are recruiting family members such as spouses, children and relatives to increase household income and give jobs to unemployed family members instead of signing additional part-time jobs.