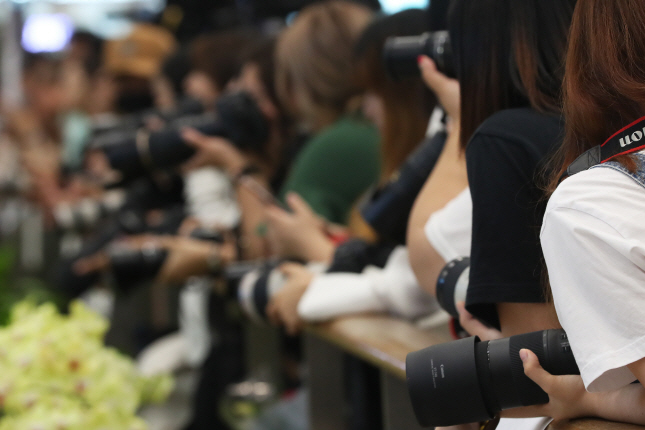 Previously, the cancellation charges were only around 100,000 won (US$88), making it difficult to prevent cases where a customer would suddenly leave the aircraft, after already having boarded, to meet a celebrity. (image: Yonhap)

SEOUL, Dec. 19 (Korea Bizwire) — South Korea’s two main airlines, Korean Air and Asiana, will be adding 200,000 won to cancellation charges for customers who cancel a flight reservation after going through the departure gate.

Previously, the cancellation charges were only around 100,000 won (US$88), making it difficult to prevent cases where a customer would suddenly leave the aircraft, after already having boarded, to meet a celebrity.

If such cases occur, all passengers must leave the aircraft and go through security checks again, which is a significant inconvenience for all.

Starting on January 1, South Korean airlines will add 200,000 won to the no-show charges for passengers who cancel their ticket after entering the departure gate for all international flights.

Starting next year, passengers will have to pay 200,000 won in addition to the no-show fee if they cancel their flight after entering the departure gate, in order to prevent any false departure schemes that exploit low cancellation or no-show charges.

Korean Air has already experienced 35 such cases this year. The numbers would only increase if other airlines were included in the tally as well.

In accordance with the Aviation Act, if a passenger onboard voluntarily leaves the aircraft, all other passengers are obligated to leave the aircraft and repeat security procedures, due to concerns that the passenger might have left behind dangerous materials.

Flight delays resulting from disembarking passengers hurt not only passengers, but also the airline and airport authorities who have to repeat security checks.

After meeting with a celebrity onboard, they insisted on disembarking the aircraft, resulting in all 360 passengers leaving the aircraft to repeat security procedures. The flight was delayed by an hour.

Korean Air had to issue refunds to all three passengers who were responsible for the incident, as well as pay Hong Kong International Airport for all costs arising from the delay.

The three passengers each paid less than 100,000 won in cancellation charges.

Law enforcement agencies in Hong Kong denied a request to investigate the case, arguing that there had been no physical damage done to other passengers.