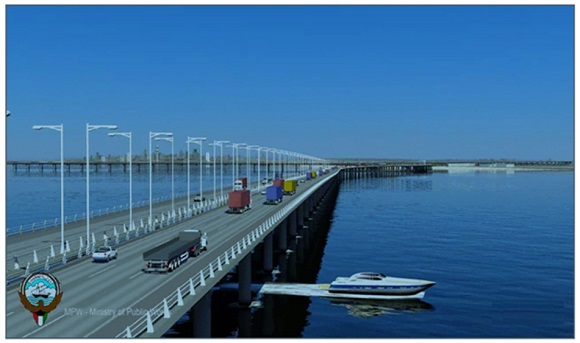 The 7.72-kilometer section will be built on the sea while the remaining 4.71 kilometers will be on the land.(image:GS E&C)

SEOUL, Aug. 20 (Korea Bizwire) — GS Engineering & Construction said on August 18 that it won a US$584.5-million order to build a bridge in Kuwait. Commissioned by the Kuwaiti Ministry of Public Works, the project calls for building the 12.43-kilometer Doha Link bridge connecting Shuwaikh to the port village of Doha in the Jahra region of Kuwait.

Of this, the 7.72-kilometer section will be built on the sea while the remaining 4.71 kilometers will be on the land. The project will be completed within 48 months after commencing on the construction.

For several years, the company has diversified its portfolios toward public works and electric projects away from large-scale plant EPC (engineering, procurement, and construction) projects. Especially in the area of public works, it has won five subway projects in Singapore and six projects for railway, roads, and bridges in Vietnam since 2009. Last year, it succeeded in moving into the Middle Eastern infrastructure market by winning a Doha (Qatar) metro contract.

A GS E&C official said, “This is the first project for us to build a bridge in the Middle East. With this contract, we will be able to enter the Middle Eastern infrastructure market in earnest.”

Based on the abundant experience in building bridges in Korea and elsewhere such as the Seohae Bridge, the Mokpo Bridge, the Yeosu Bridge, as well as the VinhThinh Bridge and the Vam Cong Bridge in Vietnam, the contractor is resolved to make it big again in the Middle East.

Oh Doo-hwan, head of the infrastructure division in GS E&C, said, “We are proud to be part of the Kuwaiti government’s ambitious project to upgrade its logistics network. With the experience and know-how we have accumulated in the bridge-building area, we will raise our profile in the Middle East and beyond.” 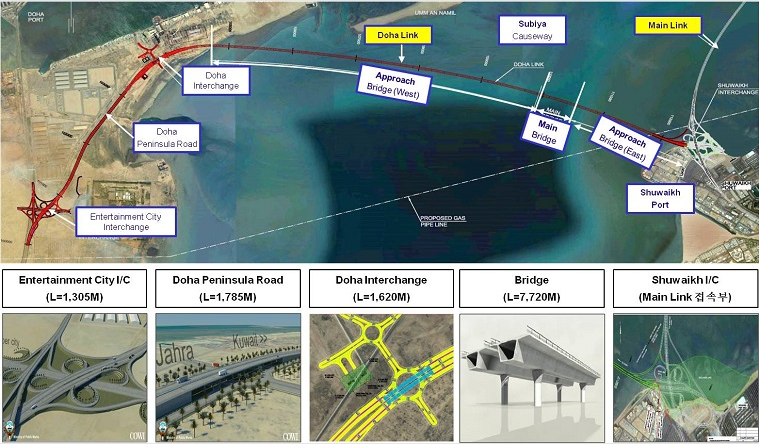 The project calls for building the 12.43-kilometer Doha Link bridge connecting Shuwaikh to the port village of Doha in the Jahra region of Kuwait.(image:GS E&C)