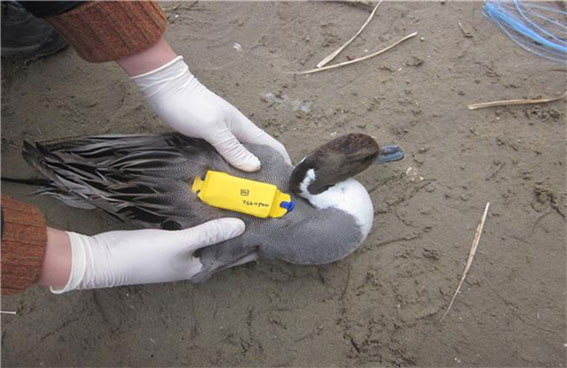 The WT-200 receives GPS information via global mobile networks through a partnership with Korea’s SKT. (image:MSIP)

SEOUL, Feb. 4 (Korea Bizwire) – The Ministry of Science, ICT and Future Planning (MSIP) has developed the WT-200, the lightest GPS tracking microchip in the world. According to an announcement from the MSIP on February 3, the WT-200 weighs only 22 grams, and can be even placed under the skin of Baikal Teals, which are the smallest bird species in Korea presumed to have been infected with Avian Influenza (AI) in 2014.

Last year, Korean authorities had difficulty tracking the transmission route of AI, since the lightest microchip at that time weighed 50 grams and was not apt to be implanted in small-sized birds such as Baikal Teals. Baikal Teals are estimated to be one of the most important transmitting agents of bird flu, with a Korean population of over 1 million making them one of the most significant species of small sized birds.

To overcome this limit in epidemiological research, the MSIP partnered with the National Science Museum, the Animal and Plant Quarantine Agency and venture company koEco (Korea Institute of Environmental Ecology) to come up with the lightest GPS tracking chip in the world.

The WT-200 receives GPS information via global mobile networks through a partnership with Korea’s SKT. It is powered by a solar panel, discarding battery systems used in the past, and can run for several years. The WT-200 is also expected to be used to monitor vulnerable senior citizens with dementia or other health issues.