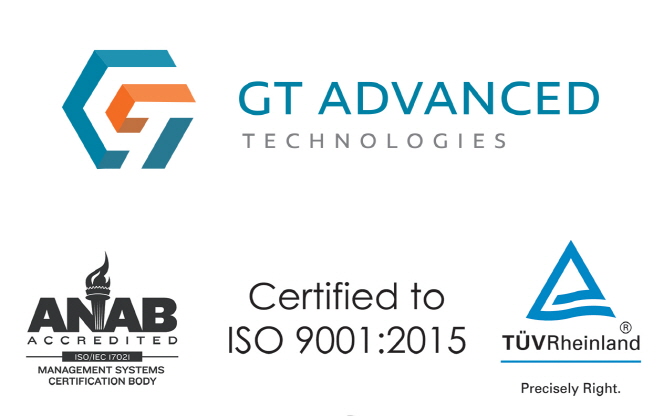 “Obtaining ISO Certification is one of many milestones that we have been able to achieve very rapidly,” said GTAT’s CEO Greg Knight. “In less than a year, we equipped our facility, reached volume production, and achieved ISO certification. I cannot think of any other company in our industry that has been able to accomplish these milestones faster.”

GTAT’s rapid growth as an ISO-certified producer of silicon carbide reflects accelerating demand coming from makers of power-electronics semiconductors. “Our focus has been to rapidly scale production and achieve the necessary quality certifications so that growing markets can take advantage of what we produce,” said Knight. In August, GTAT signed a long-term supply agreement with Taiwan-based GlobalWafers Co. (GWC) for its CrystX™ silicon carbide.

GT Advanced Technologies is a diversified technology company with crystalline growth expertise in silicon carbide and sapphire.  These important, high-demand materials deliver sustained performance and value across expanding global markets.  The Company focuses on increasing supply of these materials while driving cost down, which helps accelerate the adoption of products such as electric vehicles, power electronics, aerospace optics, and the emerging 5G telecom infrastructure. For more information about the company, please visit www.gtat.com.

A photo accompanying this announcement is available at https://www.globenewswire.com/NewsRoom/AttachmentNg/0a0d16c1-6712-4a4c-b54a-08417ba2ae6b