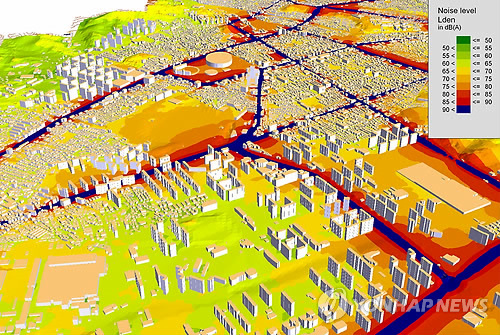 The map will indicate noise levels that are either measured or estimated, using different colors or contours. (image: Yonhap)

SEOUL, April 22 (Korea Bizwire) – As complaints about noise levels are increasing, Gwangju Metropolitan City has decided to tackle the situation by creating a noise map that covers the entire city.

The southwestern metropolitan city announced on April 21 that it would produce a map indicating noise levels around the city. The map will indicate noise levels that are either measured or estimated, using different colors or contours.

To complete the project, the city government will invest 800 million won (US$740,000) to create the map. Once the map is completed, it will be used to understand the reasons behind noise complaints, and to try to find ways to reduce the noise.

In addition, the map will allow the city to predict noise levels in different parts of the city. The city will also implement noise preventive measures such as soundproof walls, in an effort to reduce residents’ complaints.

One thought on “Gwangju to Map City Noise”