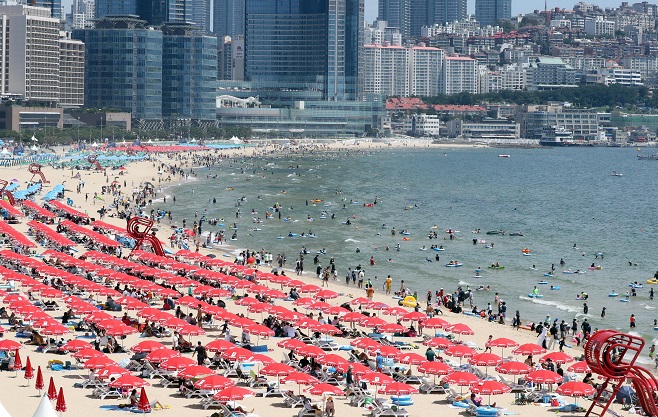 Haeundae Beach in South Korea’s southeastern city of Busan is crowded with vacationers on Aug. 16, 2020. (Yonhap)

SEOUL, Aug. 20 (Korea Bizwire) — South Korea said Thursday it has decided to close down Haeundae Beach and other beaches in the southeastern port city of Busan due to the soaring number of locally transmitted new coronavirus cases.

Under the decision, the Busan government will shut down the seven beaches in the city, effective from midnight, according to the Ministry of Oceans and Fisheries. The enhanced distancing rules will be put into effect through Sept. 30.

The country’s daily new virus cases jumped by triple digits for the seventh straight day Thursday as church-linked infections in the greater capital area continued to pile up, with more virus cases being identified across the nation.

The country added 288 more COVID-19 cases, including 276 local infections, raising the total caseload to 16,346, according to the Korea Centers for Disease Control and Prevention (KCDC).

Busan added 15 patients on Thursday, raising its virus toll to 246.

As the new daily cases spiked, South Korea decided to raise the level of social distancing in Seoul and the surrounding Gyeonggi Province by one notch to Level 2 in the three-tier system for two weeks from Sunday.

Starting Wednesday, the measure was expanded to Incheon, just west of Seoul.

But on Wednesday, the Busan city government decided to bolster its own anti-virus measures to prevent the spread of the virus in the city.

Incheon also suspended the operation of its beaches after the country enhanced the distancing rule in the region.

Under the Level 2 restrictions, outdoor gatherings of more than 100 people are strictly restricted. If they are held indoors, the ceiling is 50 people.

So-called risk-prone facilities, including karaoke rooms, clubs, PC cafes and buffets, are ordered to close down as well.

The oceans ministry said other regions will also be requested to shut down their beaches should the government decide to expand the social distancing measures.