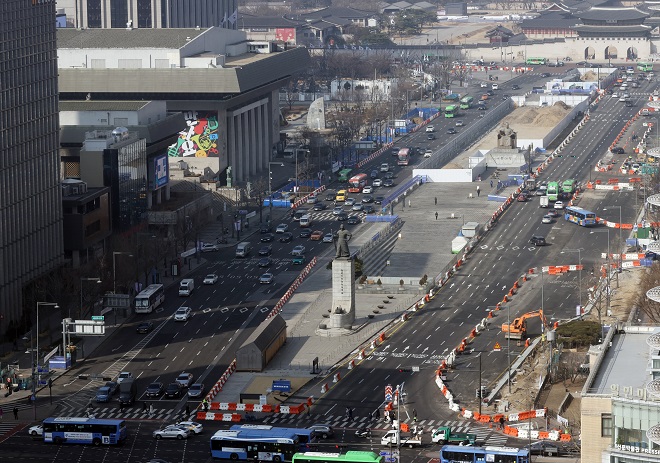 Sejong-daero, which currently lines both the east and west sides of Gwanghwamun Square, will be closed on the west side starting at midnight on March 5, leaving only the east side open to traffic.

The east side will be expanded from the current fives lanes to between seven and nine lanes, with traffic flowing not only from south to north but in both directions, according to the city government.

The west side will be replaced with a park featuring more than 100 species of trees and flowers.

The 79.1 billion-won (US$71 million) project has come under strong criticism from civic groups and opposition parties, who claim it will cause serious traffic congestion.

The critics have also accused the municipal government of rushing to complete the project with only months to go before the April 7 Seoul mayoral election, which will fill the vacancy left by former mayor Park Won-soon following his death in July.

The city government has dismissed the concerns, saying an analysis of traffic flow before and after road construction work began in November shows no serious congestion, with cars maintaining an average speed of 22 kilometers per hour, as in previous years.

It also claims to have held thorough consultations with citizens — 330 times with more than 22,000 citizens — and points to a survey showing that 85 percent of respondents are in favor of the project.

Several civic groups, including the Citizens’ Coalition for Economic Justice, filed a lawsuit in December seeking cancellation of the project.

Meanwhile, the city government has said its ultimate goal is to turn the entire area into a park, including the eastern road.