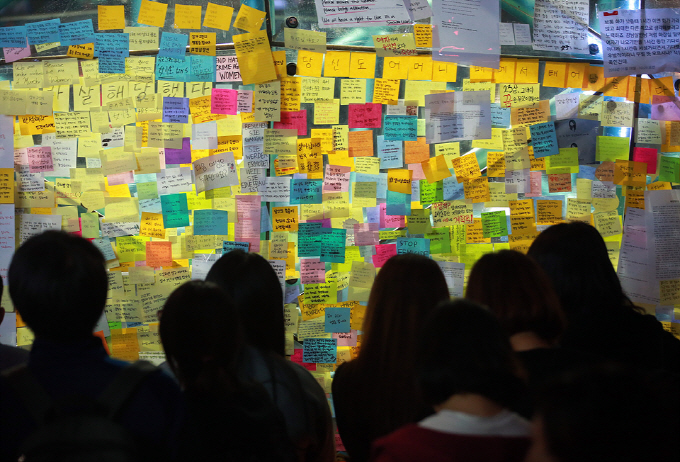 Letters of condolences for the female victim who was murdered by a stranger in the popular Seoul district of Gangnam on the gate of Gangnam Station. (image: Yonhap)

SEOUL, Jan. 21 (Korea Bizwire) — Almost half of the female residents of Seoul feel that they are exposed to constant fear living in South Korean society.

They were particularly concerned about the dangers of falling victim to a crime.

The Seoul Foundation of Women and Family released a report on Sunday comparing the statistical difference between men and women pertaining to various safety related indices.

The foundation said that 50.3 percent of female Seoulites were ‘afraid of South Korean society’, which was higher than their male counterparts (37.9 percent).

The report also revealed that 71.9 percent of women said they were exposed to constant fear of falling victim to a crime, easily surpassing their male counterparts (56.4 percent).

The answer tended to concentrate the most among women in their 20s (79.6 percent) and thirties (75.7 percent).

The Seoul Metropolitan Police Agency said 89.3 percent of all victims of sexual crime in 2017 were women. Among them, more than 70 percent were women under 30 years of age.

In 2017, 3,078 instances of dating abuse were reported, 90 percent of which involved female victims, and 73.4 percent of all dating abuse cases involved the beating and choking of the victim.

However, criminal charges were only filed against offenders 75.9 percent of the time, dropping significantly from the previous year (93.9 percent). Only 5.4 percent of the victims reported the crime to the police.

At work, superiors accounted for 64.2 percent of sexual harassment offenses, as well as CEOs (16.1 percent).

Two-thirds of all victims were in their 20s and 30s. “Rigid hierarchy within company bureaucracy leads to sexual harassment,” said the foundation.

Among victims, 63.2 percent experienced secondary offenses, ranging from unfair expulsion and dismissal to ostracization and violence.

However, only 0.3 percent of all cases were brought to prosecution, and 81.5 percent were concluded with an administrative warning.

The foundation also emphasized the need to increase female presence in the higher-end of legal and enforcement authorities for gender equality, pointing out that only 10 to 30 percent of high-ranking police officers, prosecutors, and judges are women.

Seoul vowed to use the report as baseline data for the upcoming policy of protecting female residents.