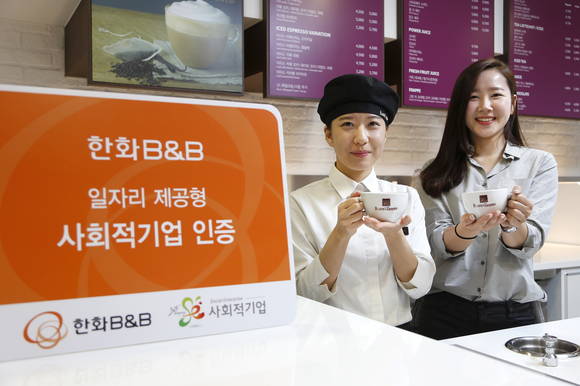 On November 20, the business group announced that its delicacy affiliate was the first Korean conglomerate to earn certification in the job-creation category. (image: Hanhwa B&B)

SEOUL, Nov. 21 (Korea Bizwire) – Hanhwa B&B, the food and beverage arm of Hanhwa Group, received a social enterprise certification from the Ministry of Labor thanks to its  efforts to create jobs for the economically disadvantaged.

On November 20, the business group announced that its delicacy affiliate was the first Korean conglomerate to earn certification in the job-creation category. The ministry classifies its social enterprise certification in different categories, including social service provision, local community contribution, and job-creation.

Hanhwa B&B, formerly the café franchise business of Hanhwa Galleria, became an independent company last December, and runs 36 “Beans & Berries” franchises nationwide. The company employs approximately 200 workers, most of them with full-time status, and there are only 20 part-timers who work irregularly during peak times or weekends. The business group had made 2,043 casual workers permanent in March, 2013.

In addition, the company has filled 40 percent or some 80 positions at the cafes with workers from single parent or low-income families, as part of its efforts to offer stable employment opportunities to those in need of assistance. .

As well as its job creation programs, Hanhwa B&B purchases more than 15 percent of its ingredients from other social enterprises, and passes on its business expertise to some 30 smaller neighborhood cafes by offering free consulting sessions every year. 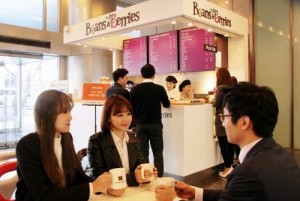 To promote mutual growth with other cafes, the company selected 13 smaller cafes this year and provided a total of 200 million won to help boost their sales and to install needed equipment. The selected cafes saw a revenue jump of 35 percent, from 7.34 million won to 11.3 million won monthly.

The company also offers free barista courses for some 200 marginalized individuals and small café owners annually at its Beans & Berries Academy in Seoul.

Meanwhile, Hanhwa B&B declined to receive various benefits following government certification, including personal expense subsidies, in the belief that the purpose of the program is not to receive government subsidies, but to provide more active social service.

Certified social enterprises should spend two thirds of their profits for social purposes. However, Hanhwa B&B decided to reinvest all its profits in its social programs. Company shareholders agreed with the measures, allocating their dividends to public services and welfare for their staff.