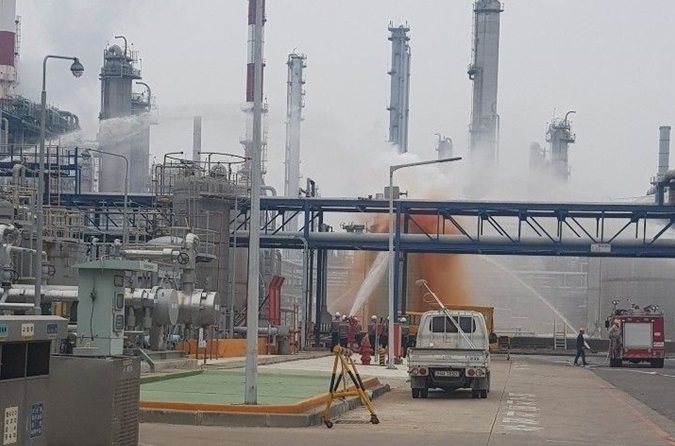 Oil mist leaks from a tank at a chemical factory in Seosan, central South Korea, on May 17, 2019. (image: Korean Confederation of Trade Unions)

The oil mist leak occurred at the company’s Daesan petrochemical complex in Seosan, 150 kilometers south of Seoul, at 11:45 a.m. last Friday, causing nearly 327 workers and residents to be treated for dizziness and vomiting.

Instead of immediately reporting the accident to the authorities, however, Hanwha Total contacted the Seosan Fire Station at 12:30 p.m., after engaging in its own fire-fighting efforts, the officials said.

Then the company’s report of the accident to Seosan’s municipality was made at around 1:30 p.m., they said, adding heads of nearby villages were notified of the oil mist leak afterwards.

Under the Toxic Chemicals Control Act, chemicals accidents are to be reported to the relevant municipality or fire station immediately.

“The province will investigate whether Hanwha Total violated the Toxic Chemicals Control Act in its delayed report of the accident, together with the Ministry of Environment and the Geum River Basin Environmental Office. It will then take an administrative measure after conducting water and air pollution inspections,” a provincial official said.

The oil mist leaked quickly from the tank, spreading to nearby neighborhoods and carrying an unpleasant odor, according to the fire service and police.

The leak occurred because oil residue in the tank was gasified when the temperature within the tank rose for an unknown reason.