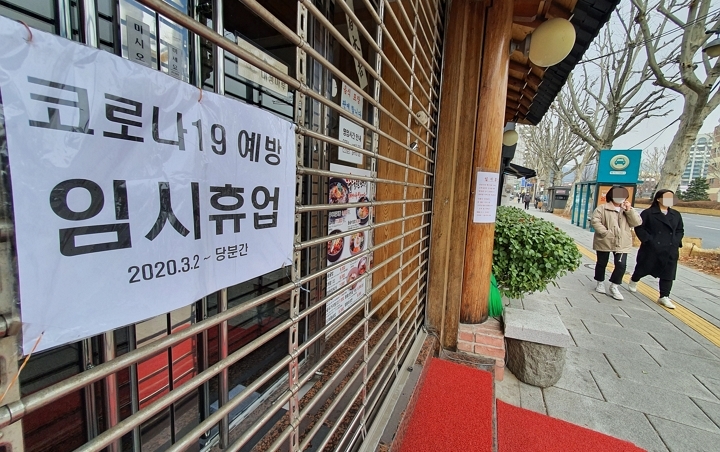 A sign announcing the temporary closure of a restaurant in Seoul to prevent the further spread of COVID-19. (Yonhap)

SEOUL, Aug. 13 (Korea Bizwire) — In the midst of a prolonged slump in consumption due to the outbreak of the coronavirus, South Korea’s restaurant industry was hit with another blow by the long monsoon season accompanied by torrential rainfall.

The food delivery business appears to be the industry’s only area of growth thank to the increasing preference for non-face-to-face channels and an increase in the number of single-person households.

During the period from the last week of last month when the rainy season begun, to the first week of this month, a local food service company saw its sales fall by 24 percent year on year, with the number of customers slipping by 32 percent from a year ago.

In contrast, the food delivery market continues to grow, spurred by the increasing popularity among Koreans of enjoying food simply at home.

Baedal Minjok, the nation’s biggest food-delivery app, reported 46 percent growth in the number of orders placed during the period from the last week of last month to the first week of this month.

By menu items, café and dessert-related orders jumped by 132 percent year on year.

Sales of fried chicken, one of flagship products for delivery services, also jumped sharply during the period. Kyochon Chicken, one of the nation’s largest fried chicken chains, saw its sales rise by 15 percent in the corresponding period.

BHC Co., one of Kyochon Chicken’s top competitors, reported 27 percent growth in sales in the last week of last month and 29 percent in the first week of this month.

As Koreans refrained from going outside for nonessential reasons due to the heavy rainfall, the demand for items from cafés and bars can be interpreted as having shifted towards delivery services.