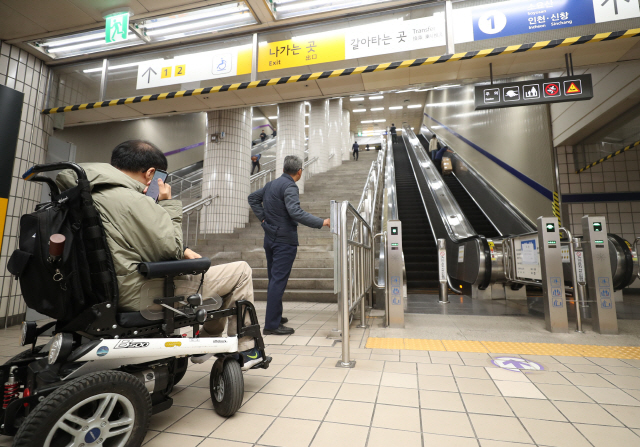 As of last year, 29 percent of the South Korean population were known to be suffering from transport poverty. (Yonhap)

The Ministry of Land, Infrastructure, and Transport (MOLIT), along with the Ministry of the Interior and Safety and the Korea Rail Network Authority, made public the map data of subway stations that includes information on accessible routes for wheelchair and baby carriage users, directions to transfer to different subway lines, and locations of various convenience stores and safety facilities, via its Public Data Portal on Friday.

The new measure offers the basic blueprints of all 981 subway stations across the country, along with the locations of convenience stores, and access routes for those with wheelchairs and baby carriages.

The data also informs users on the width of the gap between the platform and the train to prevent accidents.

The data will be offered in open API (application programming interface) packages to allow anyone to use it for development of apps and services.

The two ministries are currently working with South Korean IT giant Kakao Corp. to develop navigation services for the transport poor, aiming for release by early next year.

As of last year, 29 percent of the South Korean population were known to be suffering from transport poverty, which is expected to rise with the aging population.

The transport poor typically spend 10 to 20 minutes more than others transferring to different subway lines. “We expect that navigation systems based on our subway maps will resolve such inconveniences,” said a MOLIT official.