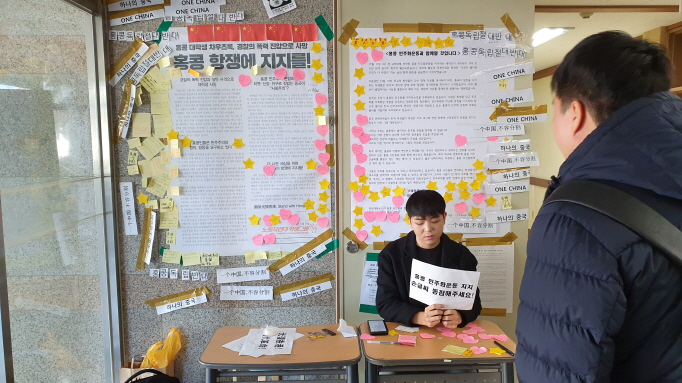 All posters and memos that were put up on the wall, however, have been sent to the university museum as a permanent archive. (Yonhap)

SEOUL, Nov. 25 (Korea Bizwire) — Hanyang University’s ‘Lennon Wall,’ a wall set up in support of the pro-democratization protests in Hong Kong, has been taken down.

All posters and memos that were put up on the wall, however, have been sent to the university museum as a permanent archive.

Hanyang University transferred hundreds of post-its and posters supporting the Hong Kong protests from their original location in front of the humanities department to the school museum on Thursday.

The school explained that it is part of its custom to collect and archive all banners and posters inside the university. “We do not have plans, however, to show them at exhibitions,” the school added.

On the day the Lennon Wall was transferred to the museum, both Korean students and those from the Chinese student association took down their posters simultaneously.

The Chinese student association has been making efforts to rein in a number of Chinese students who had confronted Korean students, but the dispute over Hong Kong seems to continue.

One Korean student whose name and photo were released on a Chinese social network after putting up a poster on the wall was subject to extreme stress and pressure.

“The insults and rudeness demonstrated by our Chinese colleagues will be remembered forever at the museum,” said the student.