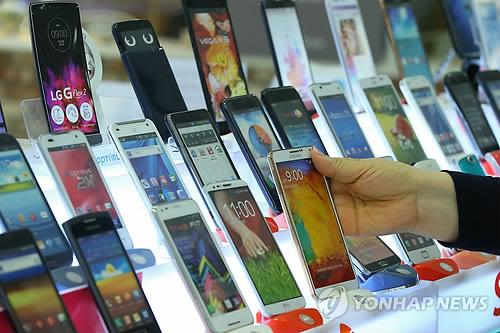 SEOUL, July 3 (Korea Bizwire) – South Korea’s top handset brands such as Samsung and LG have sold more devices on their home soil this year despite a controversial subsidy law, but their profitability is presumed to have slipped due to less sales of high-end smartphones, data showed on Friday.

Samsung Electronics, the country’s top smartphone maker, had a 63.4 percent portion of the local smartphone market through June 26, up sharply from 49.2 percent at the end of last year, and its smaller local rival, LG Electronics, clinched a 20.9 percent share, also up from 13.8 percent, according to the data compiled by the Ministry of Science, ICT, and Future Planning.

In contrast, their archrival, Apple, saw its market share fall to 13.1 percent from 27.3 percent in the country.

Late last year, the country implemented the subsidy law aimed at bringing more transparency to the market distorted by illegal subsidies rolled out by mobile carriers to take each others’ clients.

The law, among other things, strictly bans excessive discounts or subsidies to customers, which some critics have claimed benefits only foreign brands by making local handset makers lose price competitiveness.

While consumers had opted for local brands as mobile carriers rolled out various incentive packages, the restrictions on sharp discounts had made the prices of domestic models not so different from iPhone lineups, thus inducing many buyers to switch to Apple, they said.

Market watchers, however, said the local handset makers’ bolstered presence on their home turf might have come on the back of low-end lineups, unlike Apple’s high-end models, which indicates their revenues from smartphone sales might have fallen here in the first half of the year.