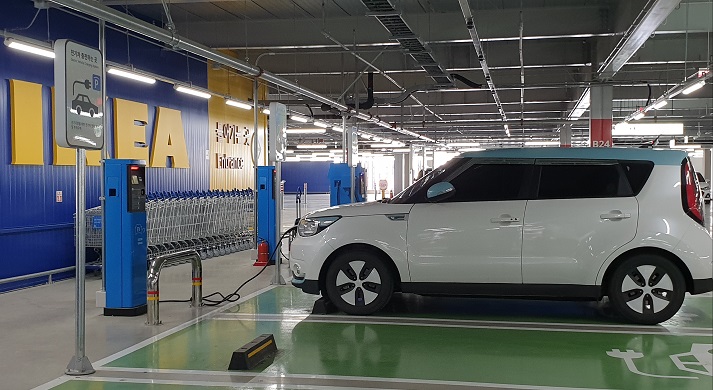 A charging station for electric vehicles is shown in this photo taken April 20, 2020. (Yonhap)

SEOUL, Nov. 30 (Korea Bizwire) — Buyers of electric vehicles (EVs) who are waiting for delivery after signing purchase contracts are on edge due to delayed delivery amid the possibility of a reduction in EV subsidies.

The Ministry of Environment set next year’s EV distribution target at 235,000 units, twice as high as this year’s target, but next year’s budget for EV subsidies was set at 1.95 trillion won (US$1.64 billion), only 800 billion won higher than this year’s level.

Accordingly, the government’s per-unit EV subsidy will likely to be reduced to 6 million won ($5,050) next year from 8 million won this year.

In addition, the government is reviewing the idea of limiting the maximum subsidies to EVs with a consumer price of less than 55 million won starting from next year. Thus far, the EVs costing less than 60 million won have received 100 percent of the subsidy.

EVs costing between 55 million won and 60 million won would get only 50 percent of the maximum subsidy.

Against this backdrop, there are many cases in which deliveries of EVs for which contracts have been signed this year are being delayed into next year due to longer waiting times resulting from the global shortage of semiconductors.

With this in mind, some consumers claim that the government should exempt the contracts signed this year from the application of new subsidy rules.

The environment ministry, however, remains reluctant to exempt cases of delayed delivery from the application of the new rules.