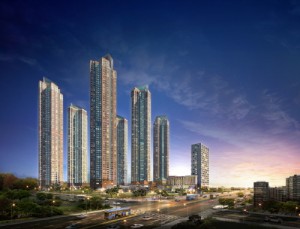 Recently a new type of living arrangement called “mixed-use development” is getting a lot of attention from home buyers and potential tenants alike.(YOJIN construction&engineering)

SEOUL, Korea, Jan 10 (Korea Bizwire) – Recently a new type of living arrangement called “mixed-use development” is getting a lot of attention from home buyers and potential tenants alike. Mixed-use development is an urban, suburban, or village development that blends a combination of residential, commercial, cultural, or industrial uses, where those functions are physically and functionally integrated, and that provides pedestrian connections.

The best examples are found in Tokyo’s Roppongi Hills and Shanghai’s Xintiandi District. Even though the same development concept was in vogue at home in 2005 to 2007, the fad disappeared from the scene because of the global financial crisis in 2008 and is making a comeback lately. The reason the latest trend may be successful is given by the fact that most contractors are offering housing units small enough for middle-class home buyers to consider moving in.

For example, “Pangyo Alpharium,” the mixed-use development in the southern suburb of Seoul being sold to the public in June last year, has attracted a total of 22,800 applicants for 881 slots. According to real estate professionals, Alpharium was reasonably priced and offered many conveniences such as department stores and retail outlets at walking distance.

The 524-unit “Dcube City” that opened in July 2011 in Shin-dorim within Seoul has also been popular because of the wealth of amenities and even 1,200-seat musical theater within the premises. Currently the average selling price for a 84-square-meter unit is 650-700 million won, or 7.74 million to 8.33 million won per square meter.

There are other promising properties within or near Seoul, including Galleria Foret (Seongsu-dong), Asterium Seoul (downtown Seoul), Trapalace (Gwangjin-gu), Eton Tower River (Gwangjin-gu), and the Sharp City (Gwangjin-gu).

Kwon Kang-su, executive at Korea Establishment Realty Agent, said, “Mixed-use developments are not just for spaces for living but for cultural enjoyment and entertainment. Given the recent trend by construction companies to build small units geared toward young professionals, I believe we will see a lot of mixed-use developments coming on line in the years ahead.”