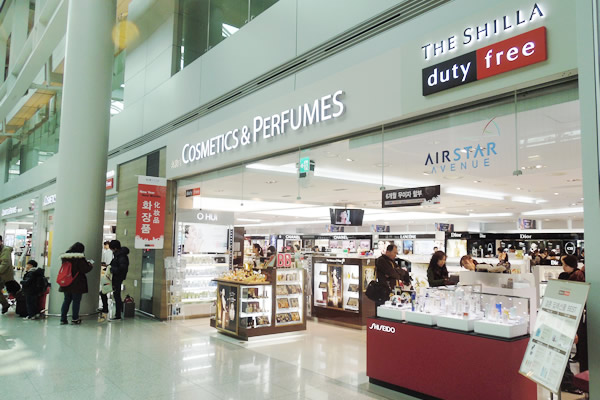 The sales of such beauty products took up 51.2 percent of all sales, jumping from 45.1 percent in 2015, the data showed. (image: Shilla Duty Free Shop)

The combined cosmetics revenue from duty-free chains, including top players Lotte Duty Free and Shilla Duty Free, stood at 6.28 trillion won (US$5.48 billion) at the end of 2016, up 51.7 percent from a year earlier, according to the data by the Korea Customs Service and the companies.

The sales of such beauty products took up 51.2 percent of all sales, jumping from 45.1 percent in 2015, the data showed.

Their proportion far outstripped those of other products, such as handbags or watches, whose sales grew 14 percent and 7.6 percent on-year in 2016, respectively.

The upbeat figure came as Korean-made cosmetics have become very popular among Asian tourists who come here to shop, fascinated by Korean pop culture and TV drama series, a phenomenon commonly referred to as the Korean Wave or Hallyu.

Local cosmetics companies have rushed to boost their marketing targeting these Hallyu fans, making advertisement clips using the celebrities who have gained popularity through movies and dramas exported to those countries.

Thanks to such efforts, the revenue portion of domestic cosmetics brands at duty-free stores also made a big leap, accounting for nearly 40 percent of the overall sales, the data showed.

“The portion of Korean brands being sold at duty-free shops is growing rapidly unlike in the past when most of the top-selling items were imported products,” Ahn Ji-young, a market analyst at IBK Securities Co.

Industry watchers said the cosmetics firms should plan ahead in developing products in line with a fast-changing beauty trends and discriminate their strategy by country or region.

“Younger Chinese tourists these days are showing a tendency to fall for color make-up so the companies need to closely track such trend,” an industry source said.