Parent Kumho Asiana Group put Asiana Airlines up for sale in April and has been aiming to sell a 31 percent stake in the airline unit this year, together with the carrier’s six affiliates, including budget carriers Air Busan and Air Seoul Inc., as part of its broad restructuring efforts.

The Asiana stake is owned by Kumho Industrial, a construction unit of Kumho Asiana, an airline-to-petrochemical conglomerate.

“We have selected the HDC-Mirae Asset Daewoo consortium out of the three consortia that submitted final bids for the Asiana stake as it was analyzed as the most qualified buyer to put Asiana’s business back on track and secure its mid and long-term competitiveness,” Kumho Industrial said in a statement.

The proceeds from the stake sale will be mainly spent to pay debts and invest in new businesses, it said.

HDC Hyundai Development expects the acquisition of Asiana Airlines would help it diversify its portfolio, which currently ranges from construction, hotels and resorts to duty-free shops businesses.

“The company will make an investment in Asiana’s fleet and services to ensure that it secures the top-tier level financial health of the airline industry after acquisition,” HDC Hyundai Development Chairman Chung Mong-gyu said in a press conference held after the announcement of the preferred bidder.

The acquisition price of new Asiana shares will exceed 2 trillion won and it will drive down the airline’s debt-to-equity ratio to below 300 percent from 660 percent at the end of June, Chung said.

HDC Hyundai Development and Mirae Asset Daewoo formed a 80:20 consortium to take over the 31 percent stake, as well as new shares that will be issued and the airline’s six affiliates, the chairman said.

“If the company completes the acquisition process, it will put a top priority on the safety of passengers among other things,” he said.

The HDC consortium submitted the overall acquisition price of 2.5 trillion won, a person with direct knowledge of the matter told Yonhap News Agency.

On Tuesday, Asiana Airlines’ shares jumped 13 percent to 6,580 won and its budget carrier, Air Busan, soared by the daily limit of 30 percent to 9,320 won. 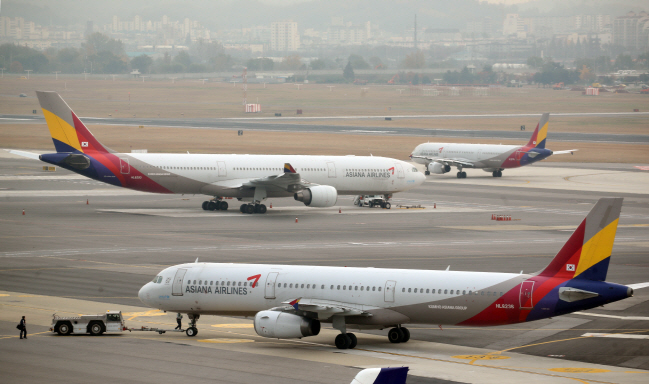 Two others are the consortium set up between airline-to-cosmetics conglomerate Aekyung Group and Stone Bridge Capital and the consortium between the Korea Corporate Governance Improvement (KCGI) and BankerStreet private equity funds.

In the initial auction held in September, Aekyung, the HDC-Mirae consortium, KCGI and Stone Bridge Capital made it onto the shortlist.

Asiana Airlines owed financial institutions a total of 2.7 trillion won as of the end of June, with 500 billion won of loans due to mature by the end of December.

Asiana Airlines is scheduled to release its January-September earnings results on Nov. 14.