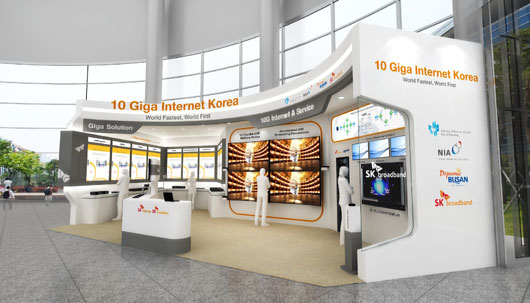 The 10-Gbps Internet service is 100 times faster than the current average speed of 100 Mbps.(image: SK Broadband)

SEOUL, Oct. 14 (Korea Bizwire) – SK Broadband said on October 13 that it would unveil the world’s first 10-Gbps (gigabyte per second) Internet service in the upcoming Plenipotentiary Conference of the International Telecommunications Union to be held on October 20 at Busan’s BEXCO Center, in partnership with the Ministry of Science, ICT and Future Planning and the National Information Society Agency.

The 10-Gbps Internet service is 100 times faster than the current average speed of 100 Mbps. For example, downloading a 1-GB file takes 80 seconds through the existing service while it takes an eye-blinking speed of only 0.8 second with the latest service.

At the booth to be installed in the conference hall with the slogan of “World’s Fastest, World’s First,” the company will allow visitors to experience the blazing fast speed and compare it with the 100-Mbps and 1-Gbps services.