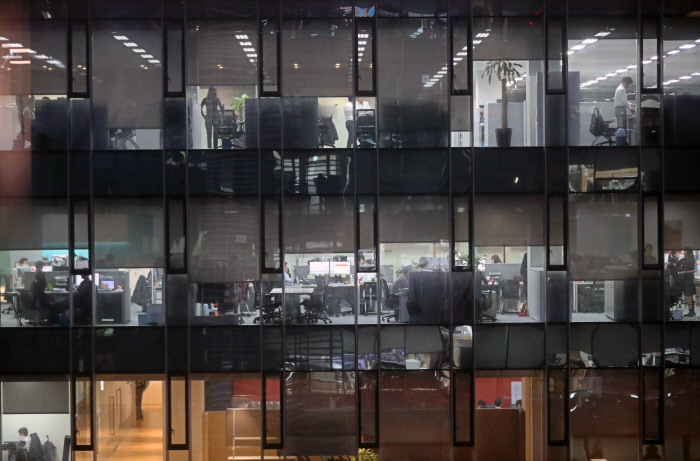 Due to the nature of certain types of employment, such as programming, that require overtime to get work done, critics say that the new policy should reflect the nature of the work. (image: Yonhap)

SEOUL, Jul. 3 (Korea Bizwire) — With the official shortened work week entering effect yesterday, those in the IT industry are struggling to keep up with the changes that came with the new policy.

On the intranet of the nation’s largest portal website, Naver, a new button that allows employees to clock in and out was included starting yesterday.

This follows the implementation of a flexible working hours system that enables employees to select their own work hours.

The company’s former policy of a task-centric work schedule allowed employees to freely come and go, focusing on getting the job done.

But this existing internal policy was axed and replaced with the new government recommendation as the former had the possibility of being deemed illegal.

From now on, the new work policy states that employees at Naver should work 40 hours a week between the hours of 6 a.m. and 10 p.m.

Kakao, the leading messaging application company in South Korea, expanded its start time to between 8 a.m. and 11 a.m.

Previously, employees were forced to report to work between 9 a.m. and 10 a.m. Employees can come to work freely and work the required 8 hours per day.

Those who need to spend more time in the office can work up to a maximum of 12 hours of overtime per week.

An official at Kakao said that by being flexible with working hours, the company was trying to effectively cope with projects that may inevitably lead to increased working hours.

“The company is trying its best to ensure that individual working hours do not exceed 52 hours per week,” said the official.

NHN Entertainment, a well-known publisher and distributor of online games, has implemented, starting this month, a new work schedule that allows workers to freely set their own working hours, from a minimum of 4 hours to a maximum 10 hours a day, all within the maximum total number of working hours per month stipulated by law.

Despite such elevated expectations on achieving work-life balance by those in the IT sector, others are voicing complaints citing unclear guidelines from the government on the matter, which may bring about confusion in the industry.

Due to the nature of certain types of employment, such as programming, that require overtime to get work done, critics say that the new policy should reflect the nature of the work.

One game industry insider noted that just before a large-scale game is about to be released, many workers are expected to work throughout the night.

“In this case, flexible working hours should be based on a 6-month time frame as opposed to the current system,” which requires employees to schedule in their hours within a 3-month window, said the source.