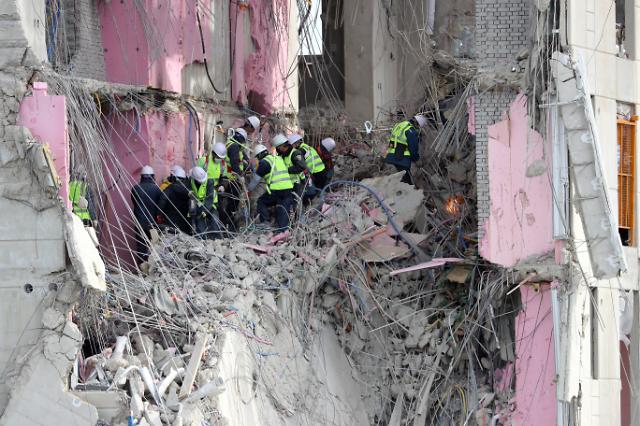 Rescue workers search for missing workers among debris on the 29th floor of a construction site of a high-rise apartment building in the southwestern city of Gwangju on Jan. 29, 2022, following the partial collapse of the building on Jan. 11. (Yonhap)

SEOUL, May 4 (Korea Bizwire) — HDC Hyundai Development Co. said Wednesday it will demolish an apartment complex in South Korea’s southwestern area to build it all over again to ally safety concerns.

HDC Chairman Chung Mong-gyu said the real estate developer will completely take down eight apartment buildings in Gwangju for reconstruction at the request of the people who are set to move in.

“There have been safety concerns for the remaining buildings,” Chung said in a news conference at the company’s headquarters in Seoul. “And we reached a conclusion that there is no other option but to rebuild the whole complex.”

The 39-story complex — 705 apartments and 142 studios — was slated to be completed in November. The developer expected the reconstruction to cost 370 billion won (US$293.6 million) and take about 70 months.

Last year, a five-story building, also in Gwangju, collapsed onto a bus during a demolition project by HDC, killing nine bus passengers and injuring eight others.

HDC Hyundai Development is known for its signature residential apartment brand, I-Park, but its popularity has diminished following the accidents.