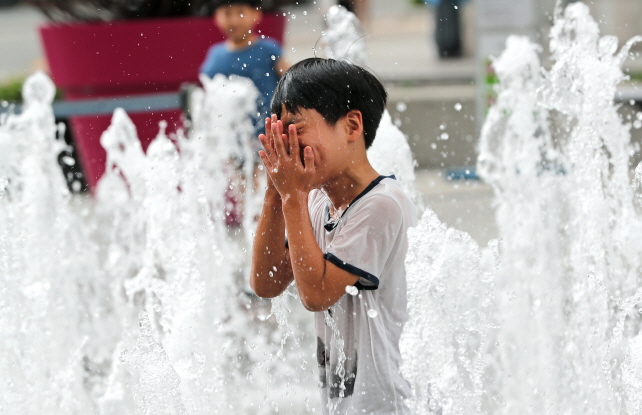 A child cools off in a public fountain in central Seoul on July 29, 2019, as a heat wave gripped much of South Korea. (Yonhap)

SEOUL, Jul. 29 (Korea Bizwire) — A scorching heat wave began to grip much of South Korea on Monday following the end of the rainy season.

The Korea Meteorological Administration issued heat warnings and advisories for almost all parts of the country as the temperature exceeded 30 degrees Celsius in southern and central regions as of 2 p.m.

Heat advisory and warning are issued when daytime highs are projected to be above 33 degrees Celsius and 35 degrees Celsius, respectively, for at least two days.

“Heat alerts could stay until early next month as the high temperatures are expected to continue for a while under the influence of the North Pacific high,” the agency said.