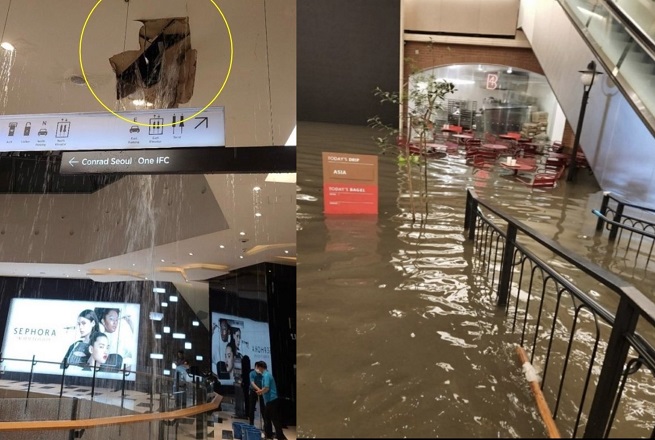 This composite photo captured from social media on Aug. 8, 2022, shows the ceiling of IFC mall (L) in western Seoul flooded with rain water and Shinsegae’s restaurant complex under water the same day.

Parts of Seoul and the surrounding Incheon and Gyeonggi Province received heavy rains of over 100 millimeters per hour Monday night, with per-hour precipitation in Seoul’s Dongjak district surpassing 141.5 mm at one point, the heaviest downpour per hour since 1942.

The torrential rain has taken a toll on the retail sector by leaving some department stores and coffee shops closed and disrupting deliveries by online retailers as major transportation routes remain under water.

According to industry sources on Tuesday, the IFC Mall in the financial district of Yeouido was temporarily closed as the heavy rain caused water to leak from the building’s ceiling.

In southern Seoul, Shinsegae’s underground restaurant complex, Famille Station, located near the express bus terminal station in the Gangnam area, had to halt operations after some of its areas were inundated.

Starbucks Korea suspended morning operations at 12 stores in Seoul and its surrounding areas due to rainwater leaking from their ceilings, while adjusting some of its employee’s working hours to ensure safety.

Some 200 stores of CU have been damaged by flooding, water and power outages as of Tuesday, its operator BGF Retail said.

Disruptions have also been reported from online shopping malls as flooding has hampered the delivery of goods to customers.

E-grocery giant Market Kurly reportedly sent its customers a notification saying some goods’ delivery might be delayed or fail to arrive due to the heavy rain.

Coupang Wow, the signature same-day delivery service of e-commerce giant Coupang, has been affected as well. Some goods scheduled to arrive on Monday were delayed to early morning on Tuesday.