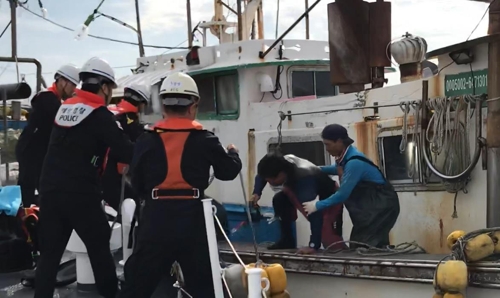 SEOUL, Aug. 31 (Korea Bizwire) — Busan Coast Guard reported that a man who went scuba diving off the coast of Busan was rescued after being lost at sea for 20 hours.

He was carried by a strong tide 66 kilometers to the northeast. When found, the man was desperately holding on to a buoy.

The warm sea temperature and his diving suit helped him survive, according to rescuers.

On Aug. 30 in Busan, two men known only as Jin and Lee, both aged 44, piloted a motor boat at around 10 a.m. from Suyeongman Yachting Center to the nearby Namhyeongjae Island.

From there, they started scuba diving, while Jin’s 10-year-old son remained on board the boat.

When his father and father’s friend showed no sign of returning after three to four hours, the son called his mom, who then reported the missing men to the Busan Coast Guard at 4:30 p.m. that day.

“The tide was too strong, so we decided to quit diving,” said Lee, “We were pushed away from the boat and we had to swim back. Jin said he would swim back to the boat and bring it if I stayed afloat.”

The coast guard searched for Jin using helicopters, ships and civilian salvage vessels, under the premise that the tide would have carried him northeast to Ulsan.

It wasn’t until the next morning, at 7:30 a.m. that the miraculous news broke. A fishing boat found Jin hanging on to a buoy some 28 kilometers east of Hangri Port, Ulsan – 66 kilometers from where he was lost.

Jin was showing the signs of dehydration and hypothermia, but recovered quickly after he was transported to a hospital nearby.

“When we go on a rescue mission, we take tidal currents into account. You should never go upstream to find the boat when you are drifting in the sea,” said the police.

“You have a better chance of being found if you grab anything buoyant, and stay warm.”