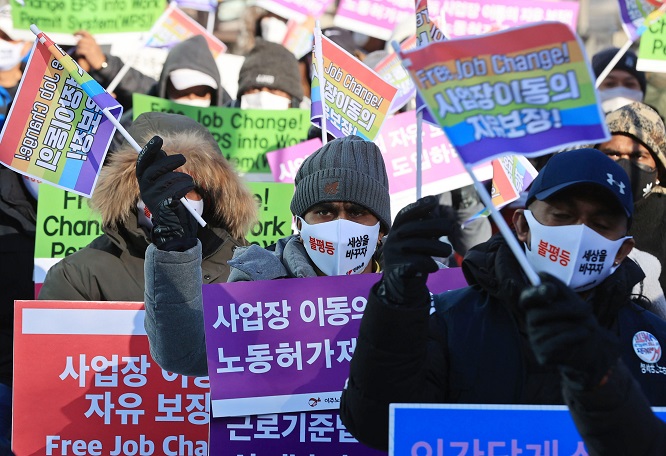 A group of migrant workers chants slogans during a rally in Seoul on Dec. 19, 2021, one day after the International Migrants Day, to demand their rights be protected. (Yonhap)

SEOUL, Jan. 13 (Korea Bizwire) — A recent study claimed that the introduction of a program designed to support migrant workers who have returned to their home countries will help prevent foreigners from staying in South Korea illegally.

Kim Yeon-hong, a departmental head at the Human Resources Development Service of Korea, said that out of 392,000 undocumented foreigners in the country, 49,000 were on non-professional employment visas (E-9), the third-largest group after visa-exempt foreigners (166,000 people) and short-term visa holders (77,000 people).

The study claimed that offering support to migrant workers wishing to return to their home countries by helping them to get a job or start a new business may prevent them from staying in South Korea illegally, and contribute to the effective management of undocumented foreigners currently residing in the country.

Such support will work as an incentive for foreigners to voluntarily return to their home countries and minimize the risk of human rights violations faced by undocumented foreigners, contributing to the stability of the country’s hiring permit program.

In a similar effort, the Korea International Cooperation Agency, an overseas aid agency, plans to select an organization to carry out a new program to support the resettlement of Nepalese workers returning to their home country starting later this year until 2027, investing US$8 million of official development assistance (ODA).

This ODA-based program helps foreign workers who have worked for 4 years and 10 months (9 years and 8 months for re-entry workers) in South Korea through the hiring permit program to resettle in their home countries through employment or startups.