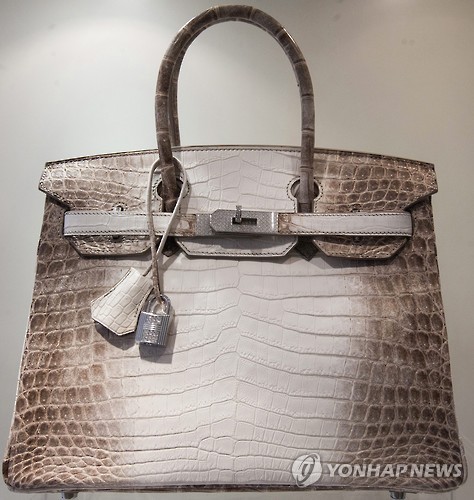 A Birkin bag is known for its rarity in South Korea, as well as its high price, being sold at around 15 million won (US$13,087), according to industry sources. (image: Yonhap)

SEOUL, Feb. 21 (Korea Bizwire) – Hermes handbags, despite their international reputation as an elegant luxury brand, are adding bitterness to their cachet in South Korea as they have been used as a “popular” item for bribes in high-profile political scandals.

Industry sources have widely suspected that either a Birkin bag or Kelly bag, two signature items made by the French manufacturer, were probably given to the wife of a former presidential secretary by an acquaintance of President Park Geun-hye’s close friend, as kickbacks for business benefits.

South Korea is engulfed by an influence-peddling scandal involving the president and her long-time confidante Choi Soon-sil, who has been accused of intervening in state affairs. The president has been stripped of her power since Dec. 9, awaiting the Constitutional Court’s ruling on impeachment.

A Birkin bag is known for its rarity in South Korea, as well as its high price, being sold at around 15 million won (US$13,087), according to industry sources. A Kelly bag is priced at about 14 million won.

It is not unusual for a customer in Korea wishing to buy one of these bags to have to wait for at least up to three years once the order is placed, according to the industry.

“We’re afraid that we are unable to take any orders at the moment as we’re quite overwhelmed to meet demand from reserved purchases made by customers a few years back,” a store manager said.

Because of such rareness, Hermes bags are an unequaled luxury good item favored by high-profile people, industry sources said.

In another lobby scandal surrounding cash-stripped shipbuilder Daewoo Shipbuilding & Marine Engineering Co., prosecutors found a pile of designer-label handbags, including Hermes bags, when they raided the house of a PR agency head suspected of bribery.