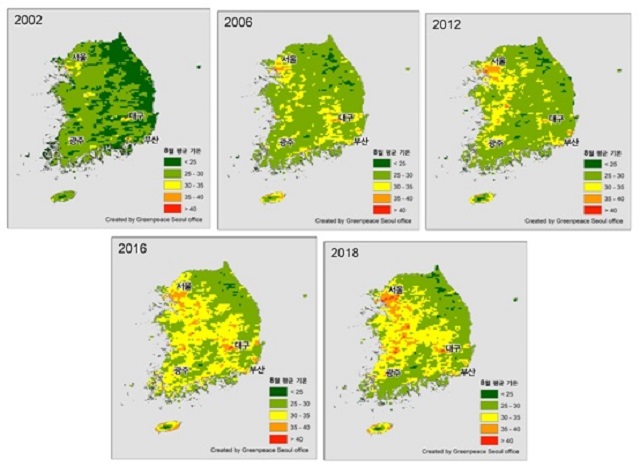 This maps provided by Greenpeace shows the expansion of high temperature areas in South Korea for a period of nine years.

Under the criteria, only 12 percent of the nation’s land territory was high temperature areas between 2002 and 2010.

Between 2011 and 2019, the portion soared to 27 percent, the organization said, estimating 27 million people, more than half of the nation’s population, currently live in high temperature areas.

Greenpeace said it made the calculations based on surface temperature data collected by NASA’s Earth observation satellite, called MODIS, as of 1:30 p.m. between 2002 and 2019.

Between 2011 and 2019, a temperature increase was observed in 87 percent of the country, except for the Taebaek Mountain Range in Gangwon Province, east of Seoul.

In Seoul and some other areas, which accounted for about 6 percent of the land territory, the surface temperature rose by more than 1.5 C in the period.

Meanwhile, the onset of hot days with temperatures rising above 30 C has advanced over the past four decades in six of the nation’s eight largest cities, excluding Incheon and Daejeon.

“Because extreme heat is a problem directly related to survival, governments and companies around the world must quickly come up with measures to reduce greenhouse gas emissions,” an official of Greenpeace Korea said.