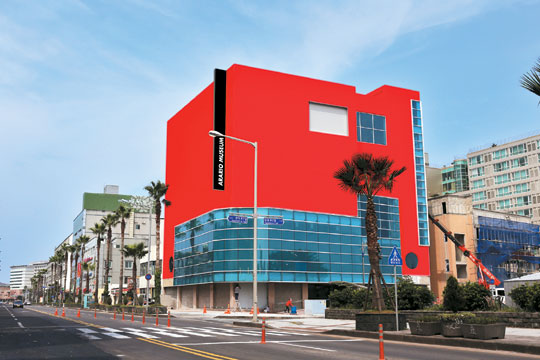 An old cinema, a bike shop and a motel are expected to be transformed into contemporary museums in the island, named after traditional names of the buildings called “Top-dong Cinema,” “Top-dong Bike Shop” and “Dongmun Motel.” (image: Arario Museum)

SEOUL, Sep. 30 (Korea Bizwire) — Following a museum in the Space Group building  inaugurated last month, three new museums plan to open in Top-dong and Dongmun-dong in Jeju Island by Kim Chang-il, an art collector and founder of Arario Galleries. An old cinema, a bike shop and a motel are expected to be transformed into contemporary museums in the island, named after traditional names of the buildings called “Top-dong Cinema,” “Top-dong Bike Shop” and “Dongmun Motel.”

The 3,048-square-meter cinema building in Top-dong used to be a cultural hotspot among young people but financial problems have forced it to be closed in 2005. Mr. Kim purchased the building to open a contemporary museum with his collections.

“What does the vessel contain, that the river does not,” a work by Indian artist Subodh Gupta, is exhibited in the museum. The 20-meter-long boat containing appliances including pots, pans, bedding, a chair, a bicycle and so forth refers to cultural dislocation prevalent in an era of shifting powers.

The museum also displays Chinese artist Zhang Huan’s masterpiece “Hero No. 2,” which is a sculpture made of 100 pieces of cowskin to show the figuration of a mother embracing her child. Aside from German painter Sigmar Polke’s works, “Deer Family” covered with clear crystal balls created by Japanese artist Kohei Nawa, Japanese-Vietnamese painter Jun Nguyen-Hatsushiba’s video artwork, and a face sculpture made by Kim In-bae, about 70 masterpieces made by 21 artists from ten countries will be exhibited.

Next to Top-dong Cinema is Top-dong Bike Shop, which is planned to exhibit major artworks created by Kim Ku-lim. His works including video art pieces and paintings reflect the times in the late 1960s. The museum that used to be a motel shows contemporary works without demolishing motel rooms and appliances. Japanese artist Aono Fumiaki utilized abandoned goods in the motel to create a totally new objet.

Not only the three museums in Jeju Island, Kim plans to open another museum called “Dongmun Motel 2” exhibiting his additional collections. He also intends to purchase buildings adjacent to museums to operate commercial facilities. As his projects progress, the district is expected to be revitalized.