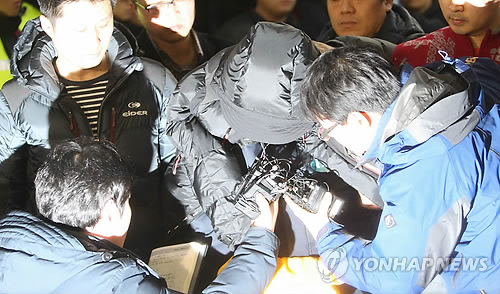 A 37-year-old hit-and-run suspect turned himself in late Thursday night and confessed he had ran over and killed the man. (image: Yonhap)

CHEONGJU, South Korea, Jan. 30 (Korea Bizwire) — A 37-year-old driver has been arrested on charges of hitting and killing a young man on his way to deliver a custard-filled bread to his pregnant wife, police said Friday.

In a dramatic conclusion to a manhunt that has kept South Koreans on their toes for weeks, the suspect, identified only by his surname Heo, turned himself in at a police station in Cheongju, some 137 kilometers south of Seoul, late Thursday night, and confessed he had ran over and killed the man with his Chevrolet Windstorm on Jan. 10.

The man, identified only as a 29-year-old trucker surnamed Kang, was walking home on a Cheongju street when a Chevrolet Windstorm fatally struck him and left the scene. It was 1:29 a.m. with no one around.

Kang was carrying a custard-filled bread, a favorite of his wife, to cheer her on in her studies to become a certified teacher. She was expecting a child in two months.

The final moments of Kang immediately became a national sensation, with locals starting to refer to him as a “cream-bread dad.”

His family had offered a bounty of 30 million won (US$27,000) for information leading to the arrest of a suspect, but to no avail.

On his way to a detention room early Friday morning, Heo told reporters he “felt so guilty he couldn’t breathe.”

Kang’s dad was waiting outside, and told Heo he was thankful.

“You made a good choice,” he said. He later told reporters he’d hoped the suspect would turn himself in rather than be caught.