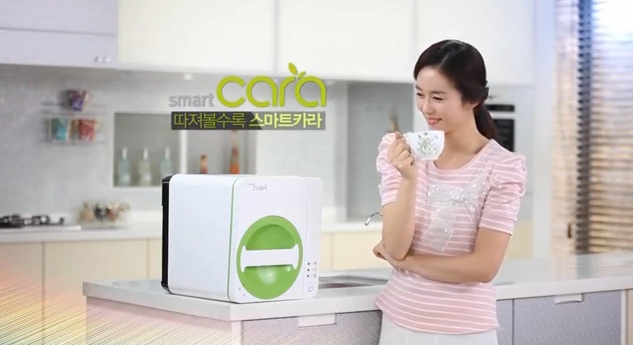 As more and more people realize the seriousness of food waste problem, they are paying keen attention to garbage disposal units that can shred, squeeze water, and dry food garbage. (image: Magic Cara)

SEOUL, South Korea, Oct 16 (Korea Bizwire) — According to a recent report by the United Nations Food and Agriculture Organization, about a third of 1.3 billion tons of food consumed by people all over the world in a year is being wasted. The food garbage alone, according to FAO estimates, can feed as many as 900 million mouths in the world. It’s not just food waste that’s problem. The same report said that carbon footprint coming from food garbage every year is equivalent to 3.3 billion tons of carbon dioxide, with the annual cost of US$750 million.

The problem of food garbage is already serious in Korea too. According to the Korea Statistical Office, Korea’s annual food waste amount is 17,000 tons in 2012. About a seventh of food produced is being thrown away, costing us 25 trillion won (about $23.5 billion) plus 800 billion won for garbage disposal. As Korea is one of the signatories of the London Convention since 1992, it is prohibited from dumping food garbage at sea starting from this year. That means all the 17,000 tons of food waste must be disposed of on land.

With the food waste problem getting serious, as well as the implementation of the London Convention provisions, the Korean government has begun a program since June 2 this year to charge fees for food garbage proportional to its weight. But it is likely to take time for this program to be fully implemented across the country as there are big price differences for food garbage bags across towns. 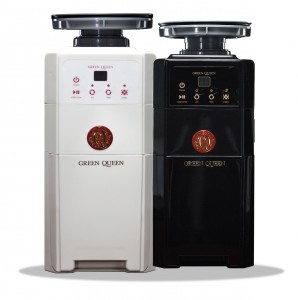 Green Queen dry the food garbage and turn it into organic animal feed, compost, or refuse-derived fuel as the machines take salt out of the garbage. (image: Green Queen )

As more and more people realize the seriousness of food waste problem, they are paying keen attention to garbage disposal units that can shred, squeeze water, and dry food garbage. These disposal units, also called “garburators,” can also transform food waste into something environmentally healthy as the remnant can make excellent soil compost.

One of such new products is the “Smart Cara,” the garbage disposal unit selected as the No. 1 small home appliance by the Korea Electronics Association in September this year. The Smart Cara turns any kind of food waste into bone-dry powder, reducing the volume by 90 percent. It can also eliminate bad odor through the eco-filters.

Woongjin Coway, the leader in home water filtration systems, has introduced in the summer a new line of garbage disposal units “Clive,” following the first generation of food disposal units in 2008. Instead of shredding and drying, these units freeze food garbage until taking it out so that it won’t stink up the whole house.

Other companies have come up with disposal units installed under a kitchen sink between the sink’s drain and the trap. For example, the units produced by Green Queen have earned the Environment Mark certification from the Ministry of Environment. These units dry the food garbage and turn it into organic animal feed, compost, or refuse-derived fuel as the machines take salt out of the garbage.

According to a survey conducted a few years ago by Gallup Korea on 502 married women residing in Korea’s five big cities, the house chore they hate to do most was food garbage disposal. That’s because of the stench and inconvenience of getting rid of it. What about men? In a survey held jointly by Haan Corp., the home appliance maker, and Hyundai Hi-Car Direct, 67 percent out of 9,676 male respondents said that the house chose they want to avoid most was taking out the stinking garbage. Getting rid of food garbage seems something nobody wants to do voluntarily. Then what about giving the job to a machine that would do it without complaining?