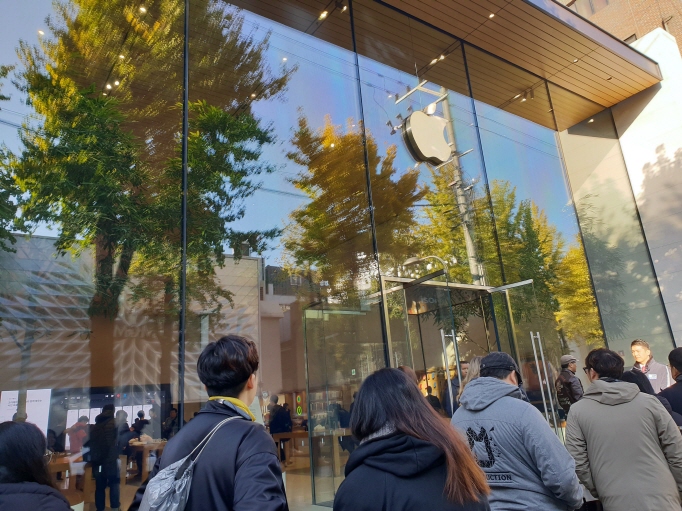 Visitors line up at Apple Garosugil in Seoul’s affluent southern district of Gangnam on Nov. 2, 2018, to purchase new iPhones on the day of their release in South Korea. (image: Yonhap)

SEOUL, Nov. 2 (Korea Bizwire) — Hundreds of South Koreans on Friday lined up for the release of the iPhone XS and XR smartphones, a sign of the brand’s popularity in the country despite it being the home of Apple Inc.’s rival Samsung Electronics Co.

Kim Sang-hyeok, a 25-year-old, was the first person to show up at Apple Garosugil in Seoul’s affluent southern district of Gangnam. He purchased the 512 gigabyte edition of the iPhone XS Max, along with the Apple Watch 4.

“I never thought about the high price,” Kim said of the two items that together cost about 2.5 million won (US$2,200). “I used Samsung Electronics’ Galaxy products before, but this time, I chose Apple because they have a nice design.”

He arrived in front of the store at 11:00 p.m. on Thursday night and waited hours for the opening of the Apple store amid the autumn chill.

The 256-GB edition of the iPhone XS has a price tag of 1.58 million won, with that of the 512-GB iPhone Max standing at a whopping 1.96 million won. The more affordable iPhone XR, which comes with an LCD screen instead of a premium OLED display, costs 990,000 won for the 64-GB version. 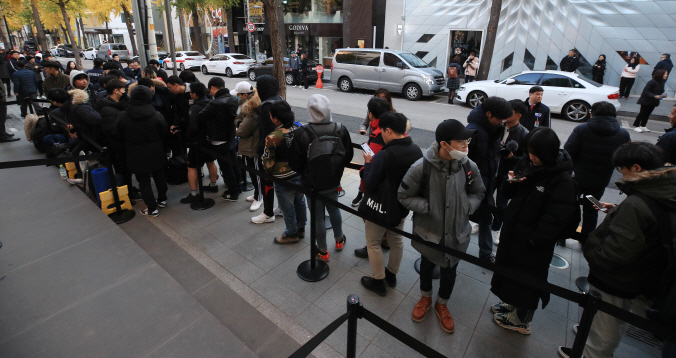 Some workers took a day off to visit the store, enduring the cold to become one of the first adopters of the new Apple products.

“I came here at 7:00 a.m. It wasn’t that cold at first, but I am starting to freeze now,” Jung Ji-woong, a 38-year-old, said. “I bought my previous iPhone online. This time, however, I have an upcoming business trip, and I came here because I wanted to have them before the trip so bad.”

Students wearing their college jackets showed up as well, hoping they could get in before class. One of them said he could not wait to grab the new smartwatch rather than the iPhones.

Numerous Apple fans who showed up at the store expressed their interest in the Apple Watch. Some claimed that the overall design and features had not significantly improved from its predecessors.

Of the units sold through preorders, the country’s top mobile carrier in terms of subscribers said 62 percent chose the iPhone XS. The iPhone XS Max, which comes with a larger display, followed at 26 percent. The iPhone XR accounted for 12 percent.

Samsung Electronics has been facing challenges from abroad as Apple and Chinese firms have been taking slices away from the South Korean giant in the high-end and budget segments, respectively. The company still maintains relatively stronger shares at home, although challenges remain ahead.

The company took up 65.3 percent of the South Korean smartphone market in the first quarter of 2018, according to data compiled by industry tracker Strategy Analytics. Apple followed with 16.7 percent, trailed by LG Electronics Inc. with 12.2 percent.

Samsung Electronics’ IT and mobile division, which covers smartphones, posted an operating profit of 2.22 trillion won in the third quarter of this year, falling 32 percent from 3.29 trillion won last year.