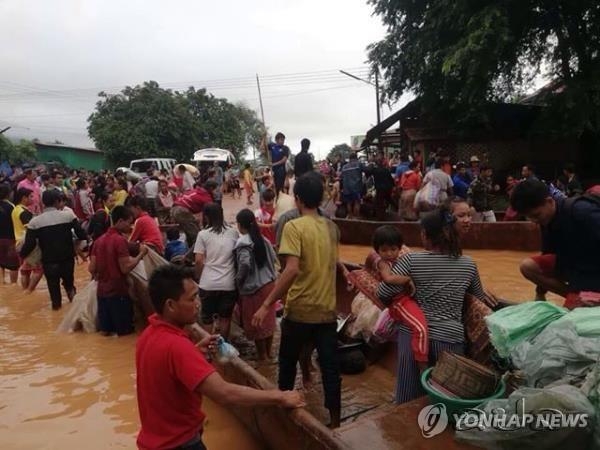 The photo provided by the Lao News Agency KPL shows people evacuating from the affected area near the Xepian-Xe Nam Noy hydropower plant in the San Sai district of Attapeu province in southeast Laos on July 24, 2018.(Image: Yonhap)

According to the report, one of the auxiliary dams collapsed around 8 p.m. Monday at the Xepian-Xe Nam Noy hydropower plant in San Sai district of Attapeu province, flooding six nearby villages. A number of people are dead and hundreds are reported missing.

The Korean builder SK Engineering and Construction (SK E&C) said Tuesday that it has formed a crisis management team to respond to the disaster. The company’s President Ahn Jae-hyun and senior company officials left for the Southeast Asian country to figure out the scope of the damage and to support rescue operations there.

Refuting the report that a dam had collapsed, however, the company said huge amounts of water had flooded over the auxiliary dam following rainfall three times greater than normal levels in the past few days.

“The overflow of water went downstream, which had already been flooded, causing more damage,” an official from the company said.

Meanwhile, a Korean national living in Laos told Yonhap News Agency that an evacuation order had been in place since Sunday due to cracks in the dam. The smallest one of five auxiliary dams broke and around 50-70 are missing, the source added, citing multiple news reports circulating on the country’s social media sites.

The Korean Embassy in Laos said it has found no Korean national affected by the flood so far.

The company is supporting the Laotian government’s rescue operations by bringing in helicopters from Thailand to help rescue stranded people. Villagers in nearby areas have been evacuated, the company said, adding that the affected area is surrounded by dense forest where communication isn’t easy, complicating rescue efforts.

The dam was built by a joint venture comprising SK E&C and Laos and Thai partners beginning in February, 2013 and was expected to go into full operation next year.