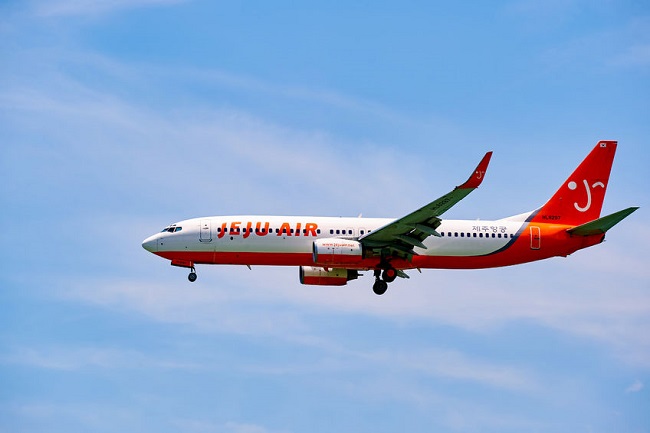 In May, which is the first month of the traditional holiday season, Jeju Air was found to be the LCC that transported the highest number of international travelers at 454,154. (Image:Kobiz Media)

SEOUL, Jul. 25 (Korea Bizwire) — Customers are increasingly forgoing established airlines such as Korean Air and Asiana Airlines for cheaper options. On July 24, the Ministry of Land, Infrastructure and Transport released figures that show the overall number of travelers opting for low cost carriers (LCC) for international travel steadily increased from January (24.1 percent of all travelers) through May (25.7 percent) this year.

Compared to figures from last May, T’Way showed the largest improvement with a 70.8 percent increase in international travelers, followed by Jeju Air at 56.6 percent, Jin Air at 49.9 percent and Air Busan at 28.3 percent.

In contrast, domestic full service carriers (FSC) and foreign airlines saw their numbers either fluctuate or slightly improve throughout the same time period, but they lagged well behind the explosive growth experienced by the LCCs.

Additional data shows that compared to last year, the number of international travelers who flew on FSCs decreased by 5.4 percent, while those who flew on LCCs increased by a whopping 50.8 percent.

Industry experts have offered some explanations for the changes in ridership. The simplest reason may simply be the economic climate. Consumers are tightening their belts but are still choosing to travel on budget airlines. The impact of the economic downturn and low job growth may also be seen among the younger generation, who increasingly consider travel to be indispensable to their lives and who either don’t have the means to pay more or don’t mind the no-frills services offered by LCCs.

Another view taken by industry insiders is that LCCs are committed to developing diverse ways to attract a greater pool of customers. “It appears that ridership is increasing because the LCCs are developing new flight destinations, offering affordable prices, expanding the size of their fleets and improving their customer service operations,” noted a spokesperson for the Ministry of Land, Infrastructure and Transport in commenting on the LCCs’ growth.  The spokesperson added that LCCs are expected to continue their growth in the near future.