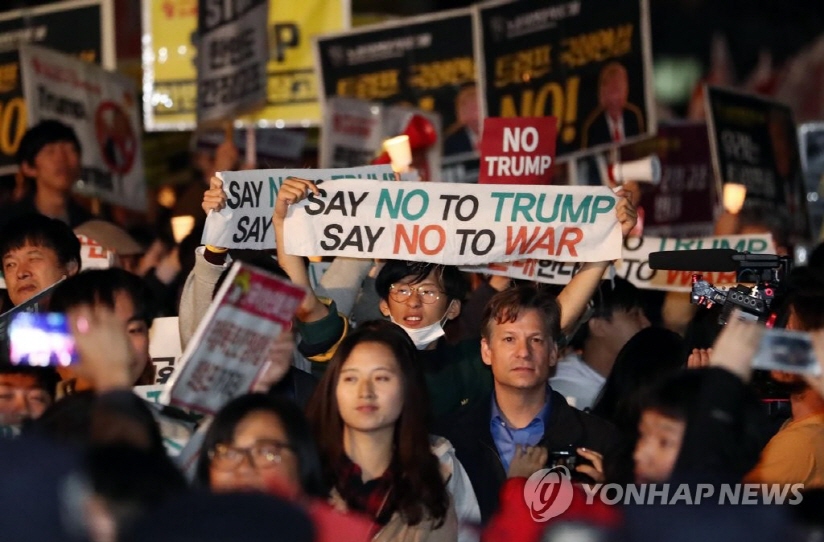 SEOUL, Nov. 8 (Korea Bizwire) — Hundreds of demonstrators staged rallies in central Seoul on Tuesday in support or protest of U.S. President Donald Trump’s state visit, which runs until the next day.

A gathering of liberal activist groups flocked to Gwanghwamun Square for a rally denouncing his trip to Seoul and blaming him for intensifying regional instability on the Korean Peninsula with his aggressive rhetoric.

The groups, which have named themselves “Collective Action for ‘No Trump,’” criticized Trump for forcing an ally into buying armaments and for revising the two countries’ free trade pact.

They gathered again at the square for a candlelight vigil at 7 p.m. The protesters set off firecrackers and shouted “No Trump, No War” in unison when Trump and his party took the road next to the square by car to attend a state dinner at the South Korean presidential office of Cheong Wa Dae about an hour later.

They tried to hold another rally at the Gwanghwamun Square in time for Trump to leave for his hotel where he will spend the night but were blocked by the police at an intersection near the square.

Trump arrived in Seoul for a two-day state visit early Tuesday. He will meet with President Moon Jae-in for a summit on key issues, including North Korea’s nuclear threats and renegotiation of the free trade agreement.

Police have beefed up security near the presidential office and its surrounding areas in the heart of the capital, deploying a larger number of police officers and setting up iron fences on the roads leading to Cheong Wa Dae.

A few religious clerics made pilgrimages in protest against the deployment of the U.S. Terminal High Altitude Area Defense system and were stopped by police as they headed for the presidential office.

On the other hand, conservative civic groups, including Protestant representatives, held their own rallies hailing Trump’s visit and supporting the Korea-U.S. alliance.

They had pro-American rallies and prayer meetings at various places around Gwanghwamun Square and enthusiastically chanted “Trump” until he passed the area.

The groups called on the U.S. president to take a bold step and visit the Demilitarized Zone, a heavily-armed area near the border separating the two Koreas, as many of his predecessors, including Ronald Reagan and Bill Clinton, had done.