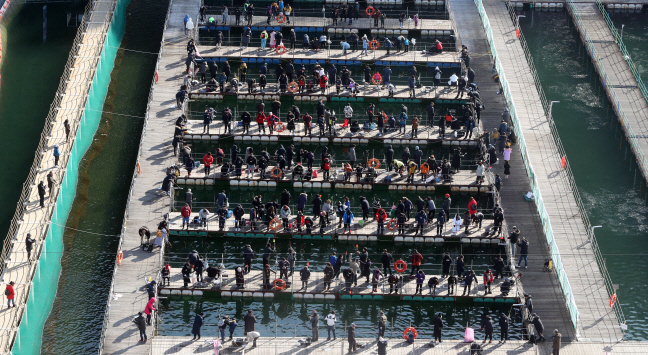 HWACHEON, Feb. 17 (Korea Bizwire) — This year’s Hwacheon Sancheoneo Ice Festival, a popular winter event hosted by the Gangwon Province county of Hwacheon, northeast of Seoul, drew to a close on Sunday, after more than 400,000 tourists from home and abroad enjoyed 21 days of ice fishing, bare hand fishing and other winter activities.

The 2020 Hwacheon Sancheoneo Ice Festival kicked off on Jan. 27 after being postponed twice due to unseasonably warm weather and came to a close at 6:30 p.m. Sunday with a closing ceremony and a fireworks display.

Organizers estimated that about 430,000 tourists visited this year’s ice fishing festival and related events, which included a street lantern festival. Attendance had exceeded 1.5 million for each of the preceding three years.

The number of foreign visitors is estimated at 100,000 this year, they noted.

Last year, an all-time high of over 1.8 million tourists, including 146,000 foreigners, participated in the Hwacheon festival. 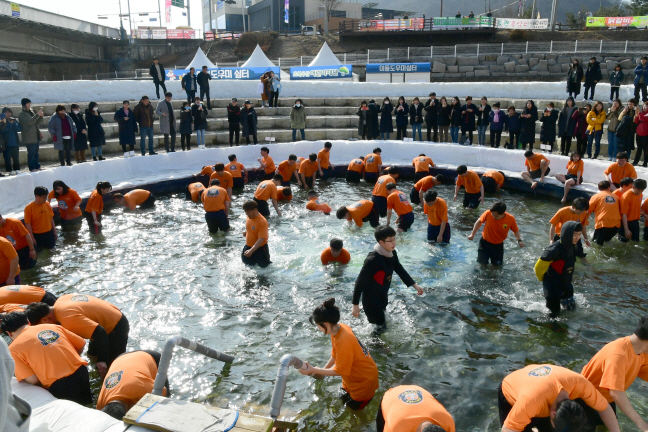 The annual festival hosted by Hwacheon, a mountainous county close to the inter-Korean border about 120 kilometers northeast of Seoul, has made headlines worldwide, with thousands of tourists trying to catch “sancheoneo,” a species of mountain trout, through holes cut into the surface of a vast frozen river and taking part in bare-hand fishing, sledding, ice soccer and other events.

This year’s sancheoneo festival was originally scheduled to kick off on Jan. 4 but had to be postponed twice due to the insufficient formation of ice on the main ice fishing venue.

Thanks to the return of the winter cold, the festival finally opened on Jan. 27, drawing a stream of tourists to Hwacheon’s festival sites.

The festival organizers and county officials attributed the significant fall in visitor numbers to the relatively warm weather, lack of ice and the new coronavirus outbreak.

Ice on the main ice fishing venue melted after 75 millimeters of rain fell ahead of the initial opening date of Jan. 4.

Festival officials and civil servants worked day and night to pump rain water out of the ice fishing venue and mobilized snowplows to lower the water temperature, but their efforts were not successful.

Due to the unusual weather, the organizers were unable to operate the ice fishing site for most of the festival’s three-week run.

Instead, they quadrupled the size of freshwater fishing sites, allowing 1,200 people to enjoy fishing at the same time. 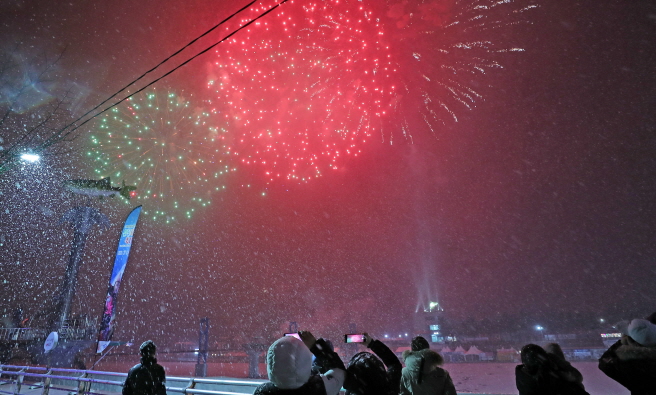 Fireworks illuminate the sky over Hwacheon during the closing ceremony of the 2020 Hwacheon Sancheoneo Ice Festival in Hwacheon, northeast of Seoul, on Feb. 16, 2020. (Yonhap)

Tourists cast fishing lines into the flowing river water and caught mountain trout with shouts of victory, while the organizers steadily released tons of sancheoneo into the river to help visitors maximize their chances.

People could also grill their catch and eat it at a nearby cooking zone.

Bare hand fishing was also very popular with visitors, and tourists showed interest in the bobsleigh experience hall and the indoor ice sculpture square, both first introduced to the festival this year.

County officials and the organizers took all possible precautions to protect festival visitors from the coronavirus. Throughout the festival site, hand sanitizer and face masks were available.

County officials said they will continue to operate the river water fishing sites for the time being to help reduce the festival’s sancheoneo inventory of over 20 tons and revitalize the regional economy.