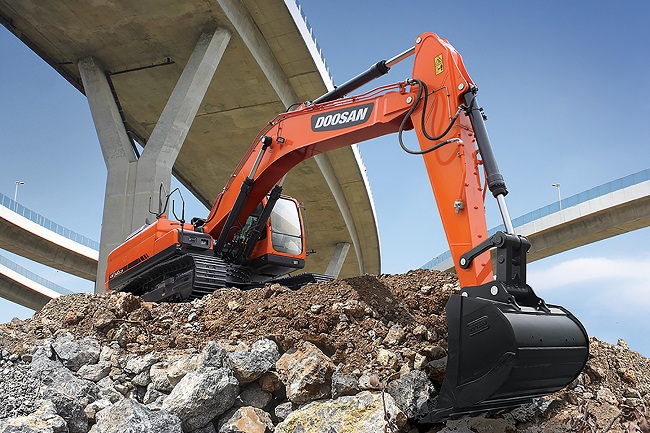 This photo, provided by Hyundai Doosan Infracore Co. on Oct. 6, 2021, shows a 34-ton excavator manufactured by the company.

SEOUL, Oct. 21 (Korea Bizwire) — Hyundai Doosan Infracore Co. said Thursday its net profit was down 44.1 percent in the third quarter from a year earlier due to sluggish sales in the Chinese market.

The construction equipment maker posted 45.9 billion won (US$39 million) in net income in the July-September period, compared with 82.1 billion won in the same period a year ago, it said in an emailed statement.

Its operating profit fell 47 percent to 33.7 billion won over the cited period, as sales in the Chinese market have been on the decline, the company said.

The operating profit was 3.5 percent lower than the average estimate in a survey by Yonhap Infomax, the financial data firm of Yonhap News Agency. The estimate of net profit was not available.

But sales rose 5.9 percent to 971.9 billion won thanks to increased global investment in infrastructure and a rise in prices of raw materials, the company said.

To combat its faltering sales in the Chinese market, Hyundai Doosan Infracore has been pushing ahead with its plan to diversify its market from China to emerging countries, including in South America, Europe and North America, it said.

“We plan to focus on the sale of lucrative large-size construction equipment in the Chinese market,” the company said.

In a regulatory filing, Hyundai Doosan Infracore said its board of directors has decided to borrow 230 billion won to jack up its stake in its Chinese unit.

In August, the top local construction equipment maker decided to buy back a 20 percent stake in its Chinese unit Doosan Infracore China Co. (DICC) for 305 billion won, wrapping up a legal dispute with its financial investors, including Mirae Asset Private Equity.

Hyundai Doosan Infracore plans to sell new shares to raise 800 billion won, after issuing some 115.1 million common shares at a price of 6,950 won per share.

The new shares are slated to begin being traded at the main local stock market on Dec. 28.

In a separate filing, Hyundai Genuin Co., the holding company of Hyundai Doosan Infracore, said its board of directors agreed to buy 2.8 million shares in the affiliate for 18 billion won, raising its stake to 31.88 percent.