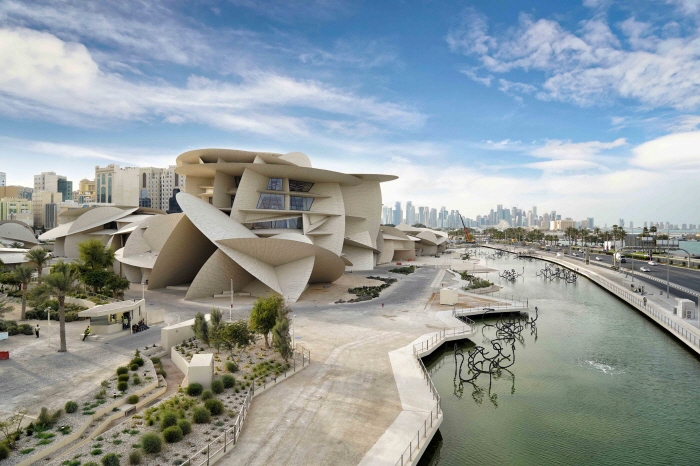 Designed by Jean Nouvel, one of France’s most renowned architects, the new museum is being praised by many as a ‘21st century masterpiece’ for its breathtaking exterior. (image: Hyundai Engineering & Construction Co.)

The new Qatar National Museum was built along the northern and southern parts of the old royal palace located in the central part of the capital city of Doha, which used to previously house the national museum.

The entire construction took more than seven years, after Hyundai E&C broke ground on the US$434 million project in September 2011.

Designed by Jean Nouvel, one of France’s most renowned architects, the new museum is being praised by many as a ‘21st century masterpiece’ for its breathtaking exterior.

The design was inspired by the Desert Rose, expressed by some 316 circular plates that create exquisite geometry.

To build the new museum, Hyundai E&C built 316 circular disks in various sizes made from 76,000 sheets of fiber-reinforced concrete, taking more than four months to install the first disk needed to create the flower-shaped structure of the building.

Indoor pillars, too, unlike ordinary buildings, have been installed in web-like curls and twists using a variety of panels.

To ensure that the initial design was fully reflected in the building, Hyundai E&C first created a mock-up version of the new museum, one-third the size of the final building, and conducted four months of intensive quality tests to resolve technological and structural problems.

Hyundai E&C, for the first time in the world, applied Building Information Modeling to the entire process of the construction.

“Despite the heat and poor climate, we were able to train more than 4,000 multinational workers to finish the world’s finest structure,” said the company.